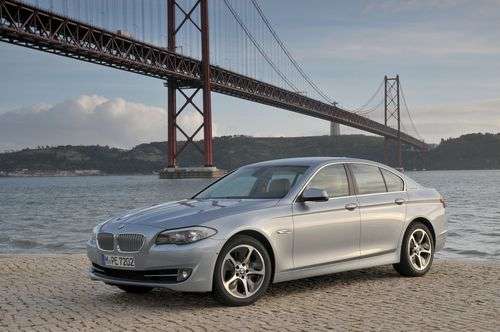 BMW reveals details of the 2012 ActiveHybrid 5

The 2012 BMW ActiveHybrid 5 is a full hybrid series 5 coupe, 0-60 in under 6 seconds, over 40 miles/gallon fuel efficiency, and availability starting in March 2012.
Advertisement

BMW announced today details and pricing of their ActiveHybrid 5 full hybrid series 5 coupe. As announced last fall, the 2012 BMW ActiveHybrid 5 will arrive in US showrooms starting in March 2012. The car has an impressive array of technology under the hood, and a price placing it in the middle of high end luxury hybrid vehicles.

The drive train is a 300 hp BMW TwinPower Turbo in-line 6-cylinder engine, coupled with a 55 hp electric motor, coupled with an 8-speed automatic transmission. The system provides a maximum output of 335 hp, giving drivers the thrill of 0 to 60 mph in 5.7 seconds. The ActiveHybrid 5 can be driven on electric power alone up to 37 mph for 2.5 miles. The ECO PRO mode is designed for optimum fuel efficiency, and for example the gasoline engine can be switched off and fully decoupled while coasting at speeds of up to 100 mph. An automatic start-stop feature shuts down the gasoline engine when it would otherwise be idling, such as while waiting at a stoplight.

The 8-speed transmission combines a wide gear range with close ratio gear spacing allowing the gas engine to be kept at optimum RPM, for a fuel-efficient, low-rpm driving style.

The control system is an intelligent energy management system controlling the engine and electric motor depending on driving conditions. It is also integrated with the navigation system to proactively adjust the engine and electric motor by looking forward along the selected route, based on the driving conditions further down the road. For example if there are hills on the selected route, the drive system can be adjusted to invest battery power in using the electric motor to provide boost for hill climbing.

In short what we have here is a BMW that is an efficient hybrid electric wonder.