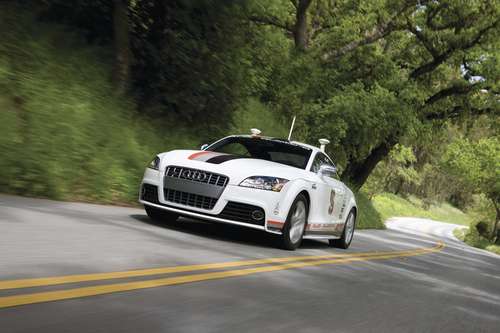 Audi's research into self-driving cars has netted a "piloted driving and parking" system, and a license from Nevada to operate self-driving autonomous cars.
Advertisement

The Consumer Electronics Show is opening this week, meaning the Automakers are announcing more hi-tech wizardry integration with the automobile. On Sunday it was learned that both Toyota and Audi were going to demonstrate self-driving cars at CES. On Monday (today), Audi announced they were the first automaker to be granted a license by the State of Nevada to operate self-driving cars on Nevada's roads. The first of those licenses went to Google.

Audi is demonstrating at CES what they call "piloted driving and parking technology." In Audi's vision, self-driving technology will be used to relieve drivers of mundane tasks like stop-and-go driving or parking, while still being able to take control of the car as needed. We're asked to believe this is similar to the auto-pilot system on jetliners. The problem with that analogy is that jetliners don't have the same kind of traffic conditions we have on city streets.

The company's research in self-driving vehicles is conducted in partnership with Stanford University through the Volkswagen Group Electronics Research Lab in Silicon Valley. Volkswagen owns Audi.

One of the teams achievements was a 2010 run up Pikes Peak, autonomously completing the 156-turn, 12.42-mile Pikes Peak circuit in just 27 minutes. That's nowhere near the speed record for that race course, but is quite an accomplishment for a car with no human control.

Pictures released by Audi show an Audi A4 equipped with an array of antenna's and radar equipment on the roof, as well as a trunk full of electronics gear. That the trunk space is full of equipment means this technology is nowhere near ready for commercialization, because there is a lot of integration work still to do. The roof has two radar antenna's and three other antenna's. On the side are logo's of Sun, Oracle (who purchased Sun in 2009) and Java, indicating that another partner is the automotive research group at what was formerly Sun Microsystems.

Self-driving cars (a.k.a. robocars) work by detecting surrounding traffic through RADAR, cameras, and other means. On-board computer equipment scans the surrounding traffic to build a map of other nearby vehicles, using that map to guide the vehicle through traffic. In theory the computer can more quickly respond than humans can, allowing self-driving cars to operate safely at a closer following distance than humans could, which could eventually address highway gridlock.

Gaining approval from Nevada for the autonomous car license is no small feat. Audi had to fill out a voluminous application form, and include documentation that the car had already been tested for over 10,000 miles.