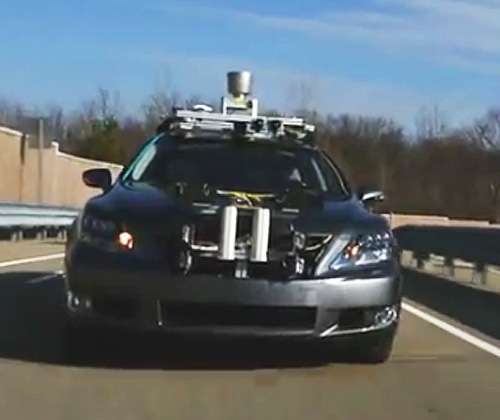 The drive towards autonomous cars picks up pace at CES

The annual electronics showcase let’s the world see all the newest gadgets and gizmos, glimpsing what may change the world to come and this year autonomous cars from Toyota and Audi may create the biggest buzz.
Advertisement

Both brands are expected to unveil their self-driving vehicles during the Consumer Electronics Show at the Las Vegas Convention Center January 8-11, according to a post by Martyn Williams on PCWorld.com.

In the six-second video below, Toyota reveals a Lexus vehicle festooned with extra sensory equipment on the roof and front end of the car as it travels along with no one apparent behind the wheel, though a technician may be in the passenger seat. This is what the brand refers to as the Advanced Active Safety Research Vehicle.

Topping the roof-mounted assembly is a conical unit that rotates exposing a bright light as it whirls about roughly every two seconds. This is presumably a laser scanning unit that uses reflected light to assemble a digital model of the cars surroundings as it proceeds.

Google’s autonomous prototype vehicles have a similar apparatus on the roof of the vehicles, as do those in development by Nokia.

These demonstrations have added significance as they come a short week before the 2013 North American International Auto Show opens in Detroit, the place where revolutionary automotive developments are frequently revealed by the manufacturers.

Not to be left behind in the race, other automakers are examining the technology to make cars self-driving and autonomous.

At Japan’s Ceatec event last year, Nissan revealed a self-parking car while Volvo is developing systems whereby autos could be put into a tag along mode, creating caravans of cars all mimicking the motions of the leader.

Stanford University, working with Google in Silicon Valley, is developing another self-driving prototype with an Audi TTS.

These and other milestones in the race to autonomous vehicles are delineated in an article titled 20 Cars that drive themselves by Colin Neagle of Network World.

BMW demonstrated a self-driving prototype in 2011 that reads and reacts to a 55-yard radius around the car.

Mercedes Benz debuted an autonomous vehicle in 2010 with convincing tests of two autonomous cars driving simultaneously. The company has stated the technology will be available in its S-Class sedan this year.

Not to be outdone, even Cadillac is working on its own luxury self-driving vehicle called the Super Cruise. However, the technology is still in development so the Cadillac system is just semi-autonomous and practical only in specific conditions.

Audi startled the world when they sent a self-driving vehicle up the winding road to the top of Pikes Peak in 2010. The vehicle climbed the mountain in 27 minutes, with a top speed of 45 mph. As a place where races are annually held, a good driver can make it to the peak in 17 minutes.

Nevertheless, in a happenstance underlining the reason for the development of self-driving cars, a news helicopter covering the event came to ground roughly, due to operator error.

All of this began at the instigation of the government’s Defense Advanced Research Projects Agency and its initial Urban Challenge in 2007 for academic and corporate research teams to compete in designing a driverless car.

Carnegie Mellon’s modification of a 2007 Chevy Tahoe named Boss completed a complicated obstacle course 20 minutes faster than any of the other entries.

Second place went to Stanford University’s Junior, an adaptation of a Volkswagen Passat into an autonomous vehicle that managed 13.7 mph navigating the 60-mile urban course. The Boss managed to do the course at 14 mph.

It is no longer hard to envision a world wherein the cars on our streets and highways all drive themselves to minimize collisions and maximize efficient traffic flow.

That doesn’t mean there will no longer be cars people can drive, but you will have to go to a track and pay to put a few laps on a gas-guzzling, muscle car or a dreamy exotic supercar. Sweet dreams will be made real at these.

Just like now, if you want to drive a Baja racer without having to buy or build one, you can go to sites near Los Cabos, Mexico or Gateway CO to do so – and it is so worth the trip!