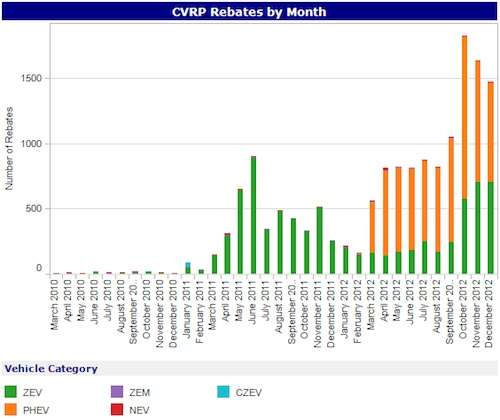 Almost 16,000 electric or plug-in hybrids sold in California since March 2010

California's Clean Vehicle Rebate Project offers an additional incentive for clean vehicle purchases, and a look at the breakdown of clean vehcile sales in California versus national sales.
Advertisement

California's Clean Vehicle Rebate Project (CVRP) is an additional purchase incentives for zero emission (all electric or fuel cell) vehicles, plug-in hybrid vehicles, and zero emission motorcycles. The project recently released data for uptake of these vehicles between March 2010 and December 2012. The data shows that over half of qualifying clean vehicle purchases were for all electric vehicles.

Applicants must be a purchaser or lessee of a new vehicle, and retain ownership, in California, for 36 months. The California rebate does add onto the Federal tax credits for these vehicles.

The Chevy Volts did not qualify for the CVRP until Feb 2012, and approximately 2,300 Volts were sold in California before that date.

The last three months of 2012 show a marked increase in sales, with over 500 ZEV, and over 1500 total, rebates per month. The most active month for ZEV's was June 2011, with almost a thousand rebates granted.

EDTA's figures also show an increase in sales from September to November 2012 (they haven't reported on December), with both PHEV and ZEV sales jumping beginning in August 2012 while hybrid vehicle sales did not jump appreciably in the same period. EDTA shows 1,708 ZEV's sold in June 2011, the month California sold nearly 1000, and that was eclipsed in October and November 2012 with sales of 2,040 ZEV's in October and 2,211 ZEV's in November.