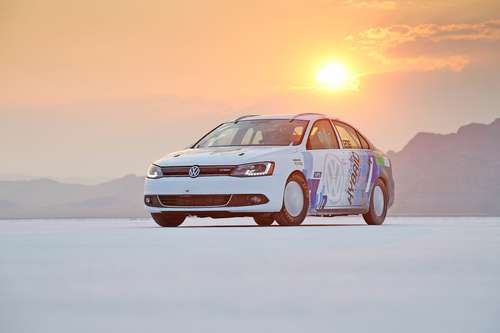 Proving that hybrid cars do not have to be slow, a modified 2013 Volkswagon Jetta Hybrid took to the salt during the SCTA Speed Week at Bonneville to prove it's mettle.
Advertisement

The stock 2013 Jetta Hybrid has a 1.4-liter turbocharged, direct-injection four-cylinder TSI gasoline engine generating 150 horsepower with a seven-speed automatic transmission and an electric motor that provides an additional 27 hp. Stock the Jetta Hybrid has 45 miles/gallon fuel efficiency. For the land speed race Volkswagon R&D from Wolfsburg, Germany modified the drive train to achieve the kind of horsepower needed to run at 185 mph (298 kph). A-Salt Racing and Advanced Product Engineering, based in Camarillo, California made other modifications to enable the car to run safely on the salt.

One wonders what they did to boost the horsepower for the speed (the press release doesn't say). However one thing is certain, it doesn't get 45 miles/gallon any more.

Because the SCTA does not have a class for hybrid vehicles, this is not an official record. The team says they'll have another go at a later date, when it becomes eligible for an official record. One problem with gaining an "official record" is with which timing body do you seek the record. There are multiple land speed organizations, and they do not share record books.

“Achieving this speed at Bonneville shows that the all-new 2013 Jetta Hybrid is a distinctly different offering in the compact hybrid class,” said Jonathan Browning, CEO and President, VW Group of America. “As well as being expected to achieve combined fuel economy of 45 mpg, the Jetta Turbo Hybrid also retains the fun-to-drive nature you expect from a Volkswagen in a segment dominated by less exciting vehicles.”

Tesla Contemplates A New Strategy for China Retail even As Sales Boom
Jay Leno on Elon Musk & EVs: “I Think He Should Get ... Credit"
END_OF_DOCUMENT_TOKEN_TO_BE_REPLACED