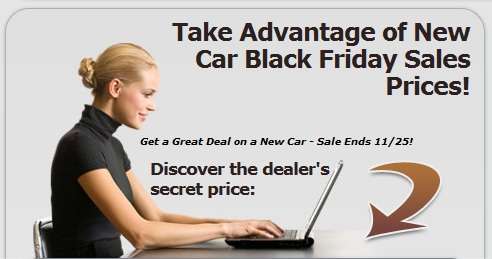 Research shows Black Friday is a good day to shop for new and used cars and the 2011 season is not going to be different.
Advertisement

While the Friday after Thanksgiving is generally considered a good day to hit the electronic stores, Black Friday 2011 can also be a great day to go car shopping. In fact, TrueCar claims new car buyers can save up to 29% on certain models this year. Unlike looking for the best buy on that flat screen TV, there are no line-ups to contend with, but consumers need to do their homework.

Do check the newspapers and online for sales in your area, but be aware that Black Friday car sales may not be advertised. That doesn’t mean dealers aren’t ready to sell. Their lots are loaded with the new 2012 models, and they still have 2011 vehicles they need to off-load. The 25th is near the end of the month, the sales people have quotas to meet, and December isn’t normally a good month for car sales so there’s even more incentive to make November count. Call the dealer ahead of time and ask if they’re having a sale.

“It’s unusual for consumers to think about car shopping during Black Friday but they can expect some of the biggest discounts of the entire year if they were to buy a car that day,” said Jesse Toprak, VP of Industry Trends and Insights for TrueCar.com. “It’s the end of the month, almost the end of the year, manufacturer incentives are at their peak, and dealers are motivated to move units to reach their objectives. Plus, dealers are typically not busy on Black Friday. It’s the perfect storm for car buying.”

The first thing to remember is that the sticker price is not final. There’s almost always room for negotiation. The best buys are generally on vehicles that the dealer wants off the lot. That includes last year’s models, and the less popular models. If you’re looking for cheap, reliable transport, and not concerned with owning the latest or most stylish vehicle, chances of a good deal are excellent. Anything in high demand, on the other hand, will be less negotiable. Before you head out to the dealers (and you should definitely check out more than one), make sure you know what the asking price should be on the vehicles you’re interested in.

The easiest way to do that is through websites like TrueCar, Kelley Blue Book, or Edmunds.com. All of these sites allow you to determine the price and discounts on the vehicle you’re interested in in your area, whether you’re looking for a new car or an old truck. You can also find out what your current vehicle is worth, allowing you to evaluate any trade-in offers. They generally post the best current deals on their sites. You can also search by manufacturer and model.

Once you know what you can expect to pay, take this information to the dealers with you. Compare it to the sticker price and use it to bargain with. If they’re not willing to move, go elsewhere. Unlike that plasma screen TV, quantities aren’t limited and another dealer may be happy to sell you what you need at a price you like.

Auto Interest wrote on November 23, 2011 - 8:39pm Permalink
It's interesting to know the best Black Friday car deal during this 2011 season. How does the Cyber Monday effect the car deals? I am assuming a growing percent of cars are sold on-line these days without a test drive.
Anonymous wrote on November 25, 2011 - 3:49pm Permalink
I am a manager to a car dealership, a very large one. People, invoice is invoice bottom line. Take away the hold back and thats it...0 profit. It doesn't matter if its black friday, easter sunday, or victory over japan day....a dealer is not going to do a stupid deal on their end. Those deals on Black Friday, you can get on the first of the month, the programs DO NOT CHANGE. Very rarely might the manufacturer do some sort of end of the month update and perhaps add dealer cash or a special finance rate, but if they don't then there is no difference.