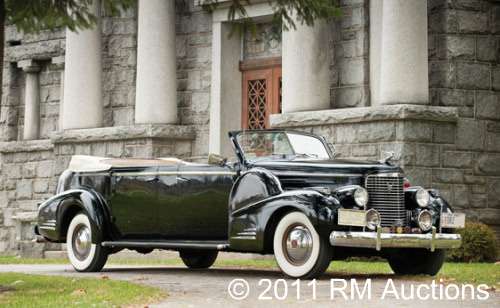 Presidential Cadillac to be auctioned in Phoenix

A 1938 Cadillac convertible parade limousine originally ordered for Franklin Roosevelt will be on the auction block at RM Auctions’ Phoenix sale on January 19, 2012
Advertisement

Nicknamed “The Queen Mary” after the ocean liner, this 1938 V-16 Cadillac convertible parade limousine with body by Fleetwood, was one of two specially built for the White House. The other, its twin, was known as “The Queen Elizabeth.” Cadillac received an order from the White House for two 16-cylinder open limos, each with a 165-inch wheelbase, for President Roosevelt.

The cars belonged to Cadillac’s Series 90 Sixteen, and used Cadillac’s second-generation V-16, a 431 cubic inch behemoth capable of producing 135 horsepower. It was actually 250 pounds lighter, 13 inches lower and six inches shorter than its predecessor. It would have needed all the horsepower it could get, as the cars are said to have been armor-plated and weighed about 8,000 pounds. In addition, they were equipped with compartments for firearm storage, sirens, lights, and communication equipment.

Both cars were leased to the US government by Cadillac and were used up to 1956 (not just the Roosevelt administration, but the Truman and Eisenhower administrations as well). They sometimes carried the President, sometimes they carried others in his motorcade.

Cadillac occasionally updated the cars. In 1946, the V-16 engines were replaced with V-8s. In 1952, newer, more powerful OHV V-8s were installed. The 1952 engine is still installed in the Queen Mary. When the cars were retired from official duty in 1956, Cadillac dealer Jack Tallman bought the Queen Mary and kept it for many years as part of the Tallman Collection. He apparently had the option of purchasing both cars but decided to take the one he thought was in the best condition.

The Tallmans owned the Caddy for more than forty years. They drove it 30-40,000 miles in that time. Some restoration work was done over that period, including overhauling the engine, and replacing the worn leather upholstery with vinyl.

The car was sold to Al Wiseman, another collector, in 1999, and shown in 2002 at the Amelia Island Concours d’Elegance, picking up the award for best original and unrestored automobile. At some point it passed into the hands of John O’Quinn, and it is being offered for sale by his estate.

The Queen Mary is currently painted black, rather than its original Midnight Blue. It’s equipped with telephones, gun holsters, replica pistols and rifles, a fender-mounted siren, and even an original 1956 DC registration sticker. It’s well-documented, and has appeared in numerous books and articles. There are even 1:24 scale replicas of the twin limousines.

Tsingshan's Threat to Tesla: EV Maker Is In Battery Crosshairs
Tesla-Funded Research Reveals One of The Biggest Mysteries of EV Battery
END_OF_DOCUMENT_TOKEN_TO_BE_REPLACED