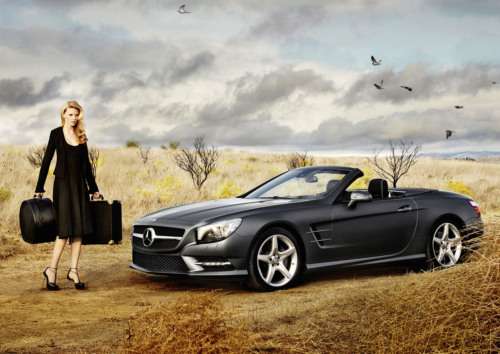 In the latest photo in the Icons of Style series, the SL Roadster stars with supermodel Lara Stone
Advertisement

As part of its 2012 Fashion Collaboration, Mercedes-Benz USA released a photo of its new SL Roadster with Dutch supermodel Lara Stone. Shot by filmmaker and photographer Alex Prager, the picture is stunning. In an empty landscape of dried grass and a few leafless shrubs, under a sky that looks like a storm is blowing up, stands a beautiful blonde in a black dress (part of the Calvin Klein Collection), holding a couple of suitcases in classic damsel in distress mode. There’s no white knight to be seen. Instead, there’s the SL Roadster in sleek black. The whole effect is both dramatic and surreal.

Of course, the car would be gorgeous even without the dramatic background and the stunning woman, but I like what the photo says about women being strong and capable, as well as beautiful. Kind of like the car, actually. Prager is apparently known for cinematic images that tell a story. This one certainly does. "I constantly reference Fellini characters and Hitchcock as well," said Prager.

The SL Roadster looks very modern, while still suggesting its predecessors. Like the dress sported by Lara Stone, it’s a classic. You can never go wrong with black. But underneath that exterior, it’s mostly aluminum, making it very light.

Does fashion sell cars? This isn’t the first high fashion photograph of a Mercedes. Earlier Icons of Style included Jessica Stam shot by Terry Richardson with the A-Class concept car, Julia Stegner shot by Nick Knight with the SLS AMG, and Milla Jovovich shot by Miles Aldridge with the Mercedes E-Class convertible. So some women might want the cars because they perceive them as fashionable, while some men would see the cars as attracting beautiful women. And of course many luxury marques also sell clothing, sunglasses, etc. with the brand logo on them. So it’s not much of a step to seeing the cars themselves as fashion accessories.

I’m ambivalent. The photograph is definitely a work of art, and cars are a lot like fashion models, insofar as everyone wants to know what the latest model looks like, and comments unfavorably on anything seen as old-fashioned. Nobody wants to drive an ugly car. With today’s emphasis on performance and fuel efficiency, most vehicles have even been “put on a diet” to get their weight down. I can’t help wondering though where the pictures of cars with hunky guys are (as opposed to the “regular Joes” you see in truck commercials) and how on earth she’s going to drive in those heels.