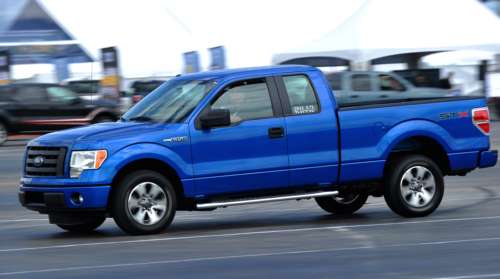 Best-selling new and used vehicles for 2011

2011 has been an up and down year for the auto industry, with everything from the economy, high gas prices, and the earthquake and tsunami in Japan affecting availability and sales. Sales picked up in the last few months of the year, making for a better showing than 2010. Based on the numbers to date, Edmunds.com expects new vehicle sales for 2011 to be around 12.8 million vehicles, compared to last year’s 11.6 million vehicles.

It seems a lot of those vehicles are trucks. Last year, the Ford F-150 was king of the hill, as it is again this year, followed closely by the Chevy Silverado 1500. The first car on the list doesn’t show up until position three. Here’s Edmunds.com’s list of the top 10 selling new cars and trucks through November.

That would suggest that at least one in five new vehicles on the road is a truck. Maybe it’s because I live in a city, but that’s definitely not the case around here.

Edmunds.com Senior Analyst Michelle Krebs notes that, “There are a lot of ‘usual suspects’ on 2011’s best-selling new cars list, but two vehicles that don’t appear in the top ten – the Honda Civic and the Honda CR-V – are the real story this year. The Civic and CR-V are two powerhouses in their segments and they suffered the most from short supply and subsequent high prices following the Japanese earthquake and tsunami in March. Look for these two vehicles to regain at least some of their footing in the U.S. in 2012.”

More trucks turn up in the used vehicles list, along with the Honda Civic. Here’s the list of top 10 selling used cars and trucks, again through November.

Of course those lists just measured quantity. To measure desirability, Edmunds.com uses its Days-to-Turn (DTT) metric, that is, how many days a car takes to sell once it’s parked on the lot.

The industry average is a mind-numbing 52 days. No wonder dealers offer incentives. The list itself is a rather schizoid mix of high fuel economy and luxury models. Maybe manufacturers should be designing fuel efficient luxury pickups—for under $20,000.