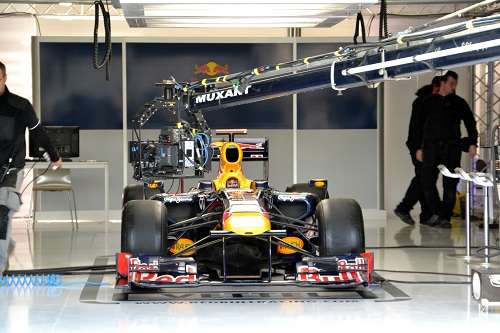 Vettel will be the focus of an ad campaign which will include digital media, online videos, a series of collector’s posters and Infiniti’s first ever globally broadcast television commercial. Quite a lot for Vettel, but he is used to being in the spotlight due to his worldwide fame.

The launch of the TV ad, filmed on location in Spain prior to the final pre-season F1 test session in Catalunya in early March, is scheduled to debut on the weekend of the 2012 Monaco Grand Prix (26-27th May).

The partnership between the automaker and the well known F1 driver builds on the relationship established between Infiniti and the Red Bull Racing driver in 2011. This was when Vettel was named as Infiniti’s first ever Global Brand Ambassador.

Sebastian Vettel personal vehicle is an Infiniti FX50S, and he makes regular media appearances for the brand. He was also central to the design and development of his ‘ultimate Infiniti’, the Infiniti FX Sebastian Vettel Version. The racing-inspired Infiniti FX will be making the transition from concept car to a limited edition production run, as announced at the Geneva Motor Show earlier this month. Roughly 200 will be produced and will likely only be offered in Europe and the Middle East. (Too bad for us Americans!) The engine will be a V-8 producing 414 horsepower and the top speed will be around 186mph.

In 2012 you are going to see more Infiniti branding on the F1 cars, including drivers and team equipment. This is due to the second year of partnership between Infiniti and Red Bull Racing. Word has it that both organizations are exploring the opportunities for a technical collaboration in the future. This adds to Infiniti's sports sponsorship which includes the NCAA and the recently released Infiniti XJ commercials.

“This is an exciting new campaign which, following on from last year’s successful Vettel FX project, further illustrates how Infiniti is maximizing its partnership with Sebastian Vettel.” said Simon Sproule, Corporate Vice President, Global Marketing Communications at Nissan. “Sebastian is undoubtedly the biggest name within the world’s most high profile form of motorsport, and he epitomizes Infiniti’s ‘Inspired Performance’ tagline. We feel he is the perfect person to lead the brand’s first ever global advertising campaign.”

Mr. Sproule added the he feels the campaign will help to communicate Infiniti’s unique approach to performance and luxury. A philosophy shared by Sebastian Vettel and Red Bull Racing and of course Infiniti.

“Having driven the range of Infinitis for the past year and co-developed a special edition FX, I was happy to work with Infiniti on this campaign. I had great fun shooting the advert in Spain, and I can’t wait to see the finished product in the coming weeks!” said Sebastian Vettel.

For behind-the-scenes pictures of Sebastian Vettel making the ads click here. Get a glimpse of the campaign by watching the video.

Panasonic Updates Profit Forecast, Noting How Much Tesla Batteries Help The Jump
2022 Porsche 911 GT3 Laps Nurburgring in 7:04 With Journalist Behind The Wheel
END_OF_DOCUMENT_TOKEN_TO_BE_REPLACED