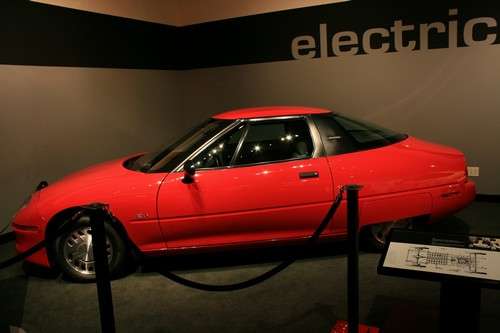 Revenge of the Electric Car opening this weekend

Revenge of The Electric Car, a documentary about the rise of the electric car, will be opening this weekend on October 21st, 2011 in three select theaters. It is the sequel to the 2006 documentary, “Who Killed the Electric Car?”
Advertisement

The documentary chronicles four key men developing, building, and promoting electric vehicles as a possibility on our roadways. These men are Bob Lutz, Elon Musk, Carlos Ghosn, and Greg “Gadget” Abbott. Each has a different story, purpose, and journey through how they are contributing to making EV's a reality on our roads.

Bob Lutz, known as General Motor's (GM) car czar and GM's Vice Chairman, pushed for the development of the Chevy Volt. Lutz contributed in ending GM”s EV1 program, which would have put many electric cars on the roads in the 90's. The Chevy Volt is GM's attempt to show the public they are serious about building these cars. However, the much talked about Chevy Volt is not quite an electric car. It has an electric motor that can take you around 40 miles on a single charge, but also has a gasoline powered engine. Thus the Volt enables you to use electric power on short trips, but if needed you can take long trips using the gas engine.

Elon Musk is quite an eclectic man. The enigmatic South African co-founded PayPal, an online payment system, and SpaceX, a private company dedicated to space exploration. Neither of these are why he is in the documentary. He is best known for co-founding Tesla Motors, the forward-thinking electric car company. Tesla has built over 1,800 Tesla Roadsters which can accelerate from 0-60mph in under 4 seconds, faster than many supercars. The documentary follows him and the trials and tribulations of trying to get a new car company off the ground. Not an easy task!

Carlos Ghosn, is CEO and President of Renault and Nissan. Ghosn is best credited for turning around Nissan when it had staggering debt ($20 billion dollars). He managed to turn around the company in only a year, and its profit was a surprising $2.7 billion. The next feat that Ghosn wants to achieve is to corner the the electric car market. With a lot of competition and a lot of people still skeptical about electric cars, it will not be easy. However, with the Nissan Leaf an all-electric vehicle that has created quite a stir, he might pull it off. Nissan and Ghosn have the potential to change an industry.

Greg “Gadget” Abbott is a hands-on guy. He builds his own electric cars and does not wait for big car companies to give him what he wants to drive. He is determined to start a Do-It-Yourself electric car revolution. He eventually wants to drive from LA to Palm Springs on single charge. His dream is put on hold due to a catastrophe at his shop. If he can remake his car and keep doing what he is doing, he still might change the world with his DIY electric car vision.

Dan Neil, the Pulitizer Prize winning automotive journalist, is the the documentary to give his expert opinion and advice. Tim Robbins, the activist and actor, is narrates the movie. Chris Paine directed and wrote the documentary, as well as “Who Killed the Electric Car?”

“Revenge of the Electric Car” will be opening in select theaters in the coming months, and will have special screenings. On the website, you can request a screening in your city. - http://www.revengeoftheelectriccar.com/

Frank Sherosky wrote on October 19, 2011 - 12:16am Permalink
With all respect, I can't help but make a point of order on that Chevy Volt. Yes, it has an IC engine for range extending. However, the IC engine merely drives a generator which charges the battery. It never, ever directly drives the wheels; meaning, the Volt is still a 100% electrically propelled vehicle. On the other hand, a full electric drives the wheels for 100 miles, but often gets its recharge from coal-powered utility plants or, at best, gas-fired utility plants. So, I do not view full EVs as somehow more green and righteous at this point in time, as many of these movie makers and auto journalists like to tout.
Sashita wrote on October 19, 2011 - 2:38am Permalink
Actually Frank, the Chevy Volt engine does in fact put power to the ground in some instances.. Not to get you on a technicality...it's actually pretty cool how it works. But the Volt is not a 100% electrically propelled vehicle. http://www.motortrend.com/features/editorial/1010_unbolting_the_chevy_volt_to_see_how_it_ticks/
Frank Sherosky wrote on October 19, 2011 - 10:04am Permalink
Per your ref that I agree with: <em>At about 70 mph, the Chevy’s motor is starting to spin too fast to be efficient, so the ring gear unlocks from the case and locks to the smaller motor/generator. Now <strong>both e-motors spin</strong>, propelling the Volt to 101 mph turning at reasonable rpm in electric mode.</em> Also in your ref article: <em>Once the Volt’s battery is depleted, the engine fires up and clutches to the generator to produce the power required to drive the car. Above 70 mph, when the generator couples to the ring gear, the engine gets a more efficient direct mechanical connection to the wheels. In defense of Chevy’s earlier stance, the only way this gas engine (or the Prius’) could ever drive the wheels without lots of help from the battery is if you somehow MacGyvered up a way to jam the sun gear to a stop. </em> First, the battery is never depleted. Its state of charge (SOC) can get down to 20 percent. If it was totally depleted then it couldn't do what the next paragraph says, works with the IC engine. Second, when the IC engine clutches to the generator, it is supposed to in order to maintain the state of charge on the battery which is still feeding power back to drive the e-motor. It appears per the ref article that this so-called more-direct situation occurs only above 70 mph at low SOC battery, where BOTH the IC engine and the e-motor drive the car because the e-demand is super high, making it more like a hybrid at that point at worst case. So, that reads to me as a design that protects the e-motor from spinning too fast and drawing too much from a low SOC battery. Even in that situation, the IC engine never drives the wheels alone without the e-motor; hence a hybrid-like condition. Still, I will conform with GM and report back. According to your MT ref, bottom line still is: the Volt is still an electric vehicle driven primarly by the electric motor. Unlike a Prius that uses an e-motor for boost, the IC engine for the Volt, aside from recharging, merely adds boost in select high speed aplications when it is most efficient and protective of the e-motors do so. Good catch on the MT article.
Adam Yamada-Hanff wrote on October 19, 2011 - 10:30am Permalink
Glad my article is creating such a good discussion!
Frank Sherosky wrote on October 19, 2011 - 8:11pm Permalink
By the way, just confirmed my question to Chevrolet regarding details of this issue.
Car guy wrote on October 19, 2011 - 8:16am Permalink
I am looking forward to see this documentary Revenge of the Electric car. Five years ago there was another interesting documentary "Who Killed the Electric Car." It made good rounds and any good liberal would have an opinion on the guilt of killing the electric car. The oil companies? Detroit? Consumers?
Carl wrote on October 19, 2011 - 4:09pm Permalink
The IC engine has a efficiently of around 30%. Power plants run at at least double that so it is a win win situation for now.
Adam Yamada-Hanff wrote on December 13, 2011 - 3:29pm Permalink
I don't know about that!