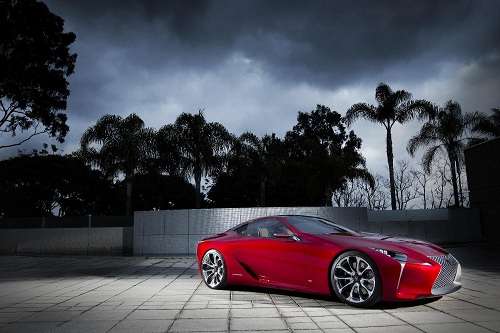 The Lexus LF-LC hybrid concept has just won the coveted People's Prize at the Chicago Auto Show, proving this is the hottest concept making the 2012 auto show rounds.
Advertisement

Toyota initially unveiled the Lexus LF-LC hybrid concept at the North American International Auto Show a few months ago. The concept was honored with the EyesOn Design award from a jury of leading designers. This is widely considered an extremely coveted automotive design award for any vehicle to receive.

Now the LF-LC concept has also won the “best concept in show” title at Chicago, as voted for by the thousands of visitors to the 10-day event. It was an amazing result, achieved with around 30 percent of the popular vote.

The hybrid 2+2 represents Lexus’s highly desirable vision of a future luxury sports coupe. The concept was created by the design team at the Calty design studio in California. It displays the new Lexus design language in its interpretation of the signature Lexus spindle grille and rear architecture. Across the bodywork, curves blend smoothly into dynamic angles, creating an engaging interplay of lines, shadows and corners. The profile the LF-LC creates is unmistakably that of a serious driver’s car, emphasizing direction and motion.

“This is just a concept at this point, but judging from the fantastic reception it received at the recent Detroit auto show, people want us to build it.” said Yoshi Inaba, President and Chief Operating Officer of Toyota Motor North America, before the show in a speech to the Chicago business community.

With this new award though it makes us wonder, will Toyota actually decide turn the LF-LC into a real production car? When I went to the Washington Auto Show recently it was clear how much people enjoyed this concept. At least looking at it on the podium it was on. It was clearly one of the highlights of the show and among the concepts vehicles on display. I think the public has spoken Toyota, build the Lexus LF-LC please!