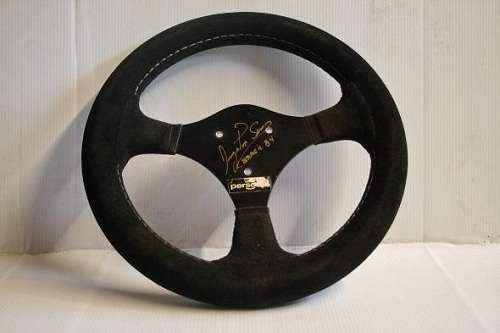 Aryton Senna is a name that lives on in many Formula 1 fans, drivers, managers, and teams minds all over the world. Now you can own a piece of Senna history as the Silverstone Auctions’ Spring Sale will have the first ever steering wheel Senna drove in his debut Formula 1 season up for sale.
Advertisement

The automotive auction put on by Silverstone Auctions, which will take place on May 16th, 2012, will feature this very important Senna steering wheel. The steering wheel is from Senna's first ever Formula 1 race, the 1984 Brazilian Grand Prix, when he was driving for Toleman. The wheel is autographed by the late great Brazilian F1 driver too.

“This is the very first F1 steering wheel Senna put his hands on in competition and is genuinely where a legend was born in motor racing terms.” said Nick Whale, managing director, Silverstone Auctions.

This will allow someone to pretend they are actually a real F1 driver with a steering wheel Aryton Senna actually put his hands on. So all those “vrooom” noises will seem so much more real!

However, the crown jewel of the upcoming Silverstone Auctions’ Spring Sale is not the steering wheel. It is undoubtedly the 1984 F1 Toleman TG-184-2 car driven by Aryton Senna in his first season. He placed in second place in the rain soaked 1984 Monaco Grand Prix, much to the amazement of everyone at Monaco. (He was a master at driving in the rain!)

Silverstone Auctions has also secured another car driven by Senna, a 1982 Ralt RT3 Formula 3 car. So the Toleman F1 car will be in good company along with this Formula 3 car.

Silverstone Auctions has sold Senna related items before and quite recently. At its first auction of this year, a helmet and race suit used by the Brazilian driver fetched £74,750 (roughly equivalent to $118,300 US dollars) and £35,650 ($56,410). This was much more than their pre-sale estimates and what anyone anticipated. Could the wheel and Toleman F1 car bring in a lot?

“Indeed, the sale of the Ayrton Senna race helmet for £74,750 made news around the world.” commented Nick Whale.

“There’s also plenty to grab the attention of those with more modest budgets with signed prints, scale race helmets and models, photographs and motorsport artwork, among the automobilia items up for sale,” added Mr. Whale.

I wonder what Mr. Whale thinks is a modest budget? Say $20,000-$30,000 to spend on automotive memorabilia and cars? Remember those Auctions broker fees!

Another notable highlight at the forthcoming Auction on May 16th is a Lewis Hamilton signed race helmet and sponsor race suit.

The Spring Sale will take place at Silverstone’s ultra-modern ‘Wing’ building, and many modern sports cars, competition cars and classic cars will be auctioned as well.

For further details about the Silverstone’s Spring Sale and Senna items up for sale visit: www.silverstoneauctions.com.