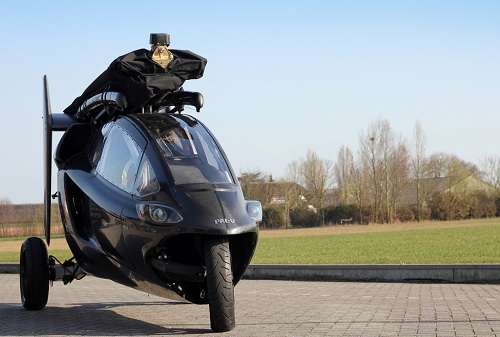 Do you hate getting stuck in traffic? Well a Dutch company has a solution for all frustrated motorists out there, a Flying Car!
Advertisement

No, this is not a science fiction novel or movie, but a real Flying Car! The Dutch company, PAL-V Europe NV, recently tested a half-plane and half-car hybrid vehicle that the company claims can cruise the streets and highways just as easily as it can fly through the air like a bird. PAL-V (Personal Air and Land Vehicle) recently released a video demonstrating the capabilities of these flying vehicles.

The video shows how PAL-V can handle the roads like a sports car, while converting into a mini-helicopter to fly off into the blue sky in. It is quite cool and something that everyone always talks about will happen in the future, “Oh yeah, they will have flying cars sooner than you think” but that reality never seems to come. Of course now the story might be different.

"You can drive like a car with your normal car, then you can fly like a plane but in one vehicle." said PAL-V CEO Robert Dingemanse via CBSNews.com. "So if you want to fly over a mountain you can do that and then drive at the other end and go to your destination or fly over water or past a traffic jam, of course. All those kind of things are possible now."

The three-wheeled PAL-V has been in the works since 2008. The design of the vehicle is quite interesting, as it needs to accommodate flight as well as being able to be driven on streets.

I am sure a lot of people are wondering, what is the top speed of the PAL-V? A cool 100 mph, on air or land it, doesn't make a difference.

To be clear the PAL-V took no shortcuts in safety. The “Flying Car” is legal in the air and on the street. Anyone with a valid driver's license can drive it.

It doesn't seem the company has released details on pricing of PAL-V's. Being able to fly over traffic though, priceless!