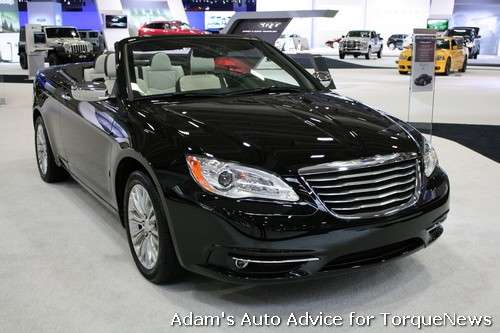 Chrysler shows a big profit in 2011

Chrysler has done the something most thought impossible. What is this incredible feat? They actually made a profit. The American automaker reported today that they had a net income in 2011.
Advertisement

I bet you are wondering, how much? Chrysler had a total profit margin of $183 million in 2011. This is the first time that Chrysler has been profitability in 14 years! In contrast to 2010, the company had a net loss of $652 million.

Chrysler would have had a better year, but it took a fairly large loss of $551 million. Let's not forgot Chrysler got a sizable amount of money... from you, the taxpayer. Well, not you directly but it did take a lot of money from the United States Treasury. The $551 million, that would have been counted toward the profit margin, went to repay Chrysler's outstanding debt obligations to the US Treasury and Canadian governments.

Net revenue for the year was $55.0 billion, up 31 percent from a year ago; fourth quarter net revenue increased 41 percent to $15.1 billion.
Worldwide vehicle sales were roughly 2 million units for 2011. In 2010, vehicle sales totaled 1.6 million. Chrysler is definitely hoping to capture a larger pie of the projected 13 million vehicle sales in 2012.

"The house is in good order. We are proud of the work we’ve done,” said Sergio Marchionne, Chairman and Chief Executive Officer of Chrysler Group and Fiat. “Now we greet a new year of high expectations with our heads down, forging ahead and focused on executing the goals we’ve set for ourselves as a company.”

Fiat, an Italian automaker, now owns 58.5 percent of the of Chrysler. This relationship seems to have benefited from Italian styling. The introduction of new models by Chrysler's brands seems to be much better then what they have been building so far.

In automotive terms, $183 million isn't that much money. This shows Chrysler is somewhat back on track and going in the right direction. It should have a better year with Marchionne and Fiat in 2012.