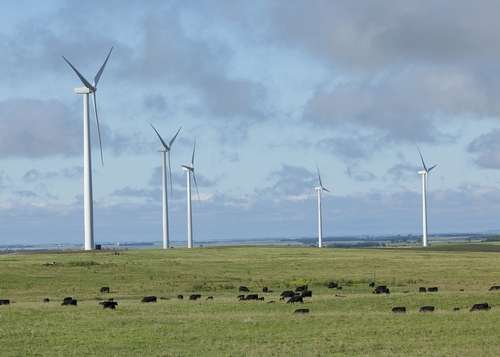 Chevy, part of GM, is investing in 16 various eco-friendly projects across the country. The projects combined will receive 40 million in funding from Chevy.
Advertisement

The projects range from biomass to wind turbines, and are part of Chevy's efforts to prevent 8 million metric tons of carbon dioxide from entering the earths atmosphere over the next five years.

Crow Lake Wind Farm in Mitchell, S.D, a 108-turbine wind farm, provides rural farmers and residents with locally generated power and financial returns. Seven of the turbines are community-owned, one is owned by Mitchell Technical Institute and is used to provide vocational training for students.

Waste heat recovery at gas pipeline pumping stations in Culbertson, Mont. and Garvin, Minn. is capturing the heat that would otherwise be vented from natural gas pumping station motors and recovering it to generate electricity. That electricity is fed back into the grid.

Chevy is also partnering with the National Forest Foundation and the San Juan National Forest in Colorado. They will help replant trees in a portion of the forest severely damaged by a fire.

The projects are all in their earlier stages. Carbon reductions from these projects will be gradual over the next five years. The projects must be reviewed and confirmed before the investment is completed.

You can see videos about the projects on – www.chevycarbonreduction.com. Over the next two months, every two weeks, videos will be released describing the eco-friendly projects Chevy plans to invest in. There will also be a Facebook application to let consumers showcase their Eco-friendliness by planting virtual trees on their Facebook walls. The National Forest Foundation along with Chevy, will plant a real tree in a US forest next year for every virtual tree. There are up to 175,000 trees that hopefully will planted.

“Now that we’re committed to 16 diversified projects, we are fortified in our support of community-based, carbon-reduction initiatives,” said Chris Perry, vice president of Chevrolet Global Marketing and Strategy. “It’s fulfilling to back organizations working toward building a cleaner, more-secure energy future.”

Chevy set its carbon-reduction goal on the estimated emissions in 2011 from the 1.9 million vehicles it is expected to sell in the US between November 18, 2010 and December 31, 2011.

Chevy is continually engaging, talking, and working with many organizations. They are working with knowledgeable academics at the Climate Neutral Business Network to advise it on the investment agreements. In addition Chevy is working with the Bonneville Environmental Foundation to find and support the various projects.

Chevy also signed a contract to partner with the Maine State Housing Authority earlier this year. The partnership will help support weatherizing 5,500 low-income houses in Maine, where winters are quite harsh.

It is great to see Chevy working on these 16 eco-friendly projects all across the country.