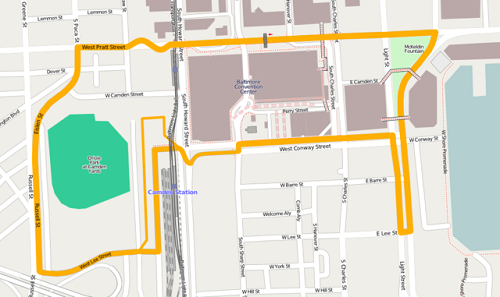 The Baltimore Grand Prix has taken another interesting and crazy turn.
Advertisement

The Baltimore Business Journal reported the city inking the deal with Andretti Sports Marketing and Race On a few days ago to put on the 2012 Baltimor Grand Prix which is set to take place on Labor Day weekend.

The city of Baltimore terminated the five year contract with Baltimore Racing Development, the private company that originally ran and organized the 2011 Baltimore Grand Prix. The company went bankrupt after it could not pay the city tax bill of $1.5 million. As well total the company owes to various vendors and companies is $12 million.

This forced the city to find another company to put on the 2012 Baltimore Grand Prix. The city inked a five-year deal with Downforce Racing headed by racing organizer and contractor Dale Dillon. Dillon, who grew up in Indianapolis, has experience putting on other large racing events. Additionally Dillon is largely credited with making the 2011 Baltimore Grand Prix a reality and not a disaster.

It sounded promising that the city was able to task Dillon and Downforce Racing with running the 2012 Baltimore Grand Prix, but as the race got closer and closer, the company started to seem less then reliable.

Downforce missed several key financial reporting deadlines to the city of Baltimore. They hadn't setup or started to sell tickets for the race, which was a bit surprising to say the least. As well press credentials and grandstand setup was still being sorted out by Downforce.

Now the real question every wants to know, “Can Andretti Sports Marketing and Race On put on the race with so little time until Labor Day weekend?”

The city is touting Mr. Andretti's experience as key. However, we heard this before with Dillon and Downforce Racing too. Jade Gurss, who is a spokesperson for the company, said they already have sanctioning agreements with IndyCar and the American LeMans Series, who are the two majoring racing organizations taking part in the race.

The deal still needs to be approved by Baltimore's city Board of Estimates. The committee will vote on the deal this week on May 16th. It is expected to pass easily though. Full details of the contract can be viewed here.

What's not expected to be so easy, putting on a large race again in a city that is most famous for the crime TV show “The Wire.”