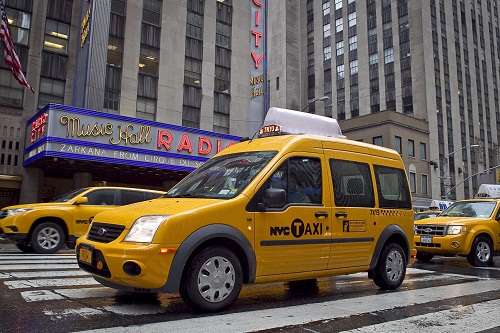 There was a time when visitors to New York City put a cab ride on their to do list. With the potholes the size of canyons and vehicles lacking shock absorbers, taking a cab in New York was better than a ride at an amusement park. New Ford Taxicabs are coming to NYC.
Advertisement

Today, the Ford Transit Connect, Ford’s Turkish-built truck, is picking up passengers, outfitted in taxicab yellow and featuring “NYC Taxi” painted in black on the two front doors. Today there are about a half a dozen on the street and more - about 400 - will appear in the next few months. The Transit Connect will share the streets with the Nissan NV200, which will become the official New York City starting in late 2013.

The Transit Connect Taxi is certified to Ford Light Commercial Vehicle Durability Standards while suspension components and the underbody structure have passed requirements for potholes and curbs. The 39-foot turning diameter makes it easier to handle tight spots.

The standard Ford Transit Connect – 2010 North American Truck of the Year – features a 2.0-liter I-4 engine that gets 22 mpg in the city and 27 mpg on the highway, an improvement of about 30 percent compared with traditional taxis.

Transit Connect Taxi is available with an engine preparation package for conversion to compressed natural gas (CNG) and liquefied propane gas (LPG). Both CNG and LPG lower taxi fleets’ operating costs and are better for the environment. The Transit Connect is the first global product to make its debut under the One Ford plan.

New York has about 13,000 taxis. Not all of them will be new, but the turnover to the Nissan NV200 and the Transit Connect marks the end of a long run for Ford’s Crown Victoria, which has been a predominant New York cab since the 1990s. Ford and the Taxi and Limousine Commission introduced a stretched version of the vehicle in 2001. Minivans and even some Ford Explorers rounded out the fleet as the Checker faded into history.