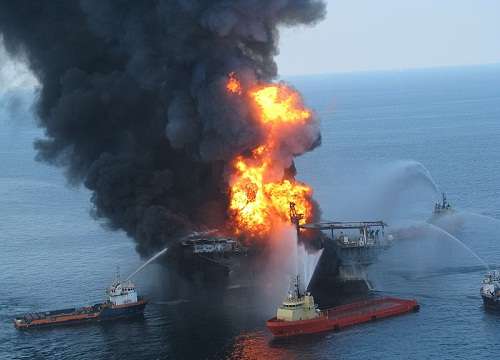 The federal government is expected to sanction BP, Halliburton and Transocean for violations tied to lasty year’s Gulf oil spill.The move will effect gas consumption, fuel economy and the environment that are on every driver's mind.
Advertisement

The Bureau of Ocean Energy Management, Regulation and Enforcement (BOEMRE) is expected to send the companies notices of non-compliance with seven offshore drilling regulations at the Deepwater Horizon disaster as early as next week.

This is the first time federal regulators have sanction contractors for offshore regulation violations. The companies face civil penalties. Those fees were capped at $35,000 per incident, per day.

Oil spill, violations covering the record 87 days or longer that crude was spilling into the gulf could bring the fees to over $3 million per day, totaling about $40 million. Clean Water Act fines and other penalties are expected to be issued as well. Michael Bromwich, head of the Interior Department’s Bureau of Ocean Energy Management, Regulation and Enforcement says those fees are too low and should be raised substantially. The Obama administration adjusted them upwards but only for inflation.

The Coast Guard and the ocean energy bureau joint investigation concludes that BP, Halliburton and Transocean were responsible for the work at BPs Macondo well and had violated seven regulations.

BP was found to have violated seven regulations; Transocean three; and Halliburton (via its subsidiary Sperry Sun) three.

The panel found evidence that BP and, in some instances, its contractors violated federal regulations and in doing so failed to protect health, safety, property, and the environment by (1) performing all operations in a safe and workmanlike manner; and (2) maintaining all equipment and work areas in a safe condition.. BP, Transocean, and Halliburton (Sperry Sun) failed to take measures to prevent the unauthorized release of hydrocarbons into the Gulf of Mexico and creating conditions that posed unreasonable risk to public health, life, property, aquatic life, wildlife, recreation, navigation, commercial fishing, or other uses of the ocean. BP, Transocean, and Halliburton (Sperry Sun) failed to take necessary precautions to keep the well under control at all times. BP and Halliburton failed to cement the well in a manner that would properly control formation pressures and fluids and prevent the release of fluids from any stratum through the wellbore into offshore waters. BP failed to use pressure integrity test and related hole-behavior observations, such as pore pressure test results, gas-cut drilling fluid, and well kicks to adjust the drilling fluid program and the setting depth of the next casing string. BP and Transocean failed to conduct major inspections of all BOP stack component. BP failed to perform the negative test procedures detailed in an application for a permit to modify its plans.