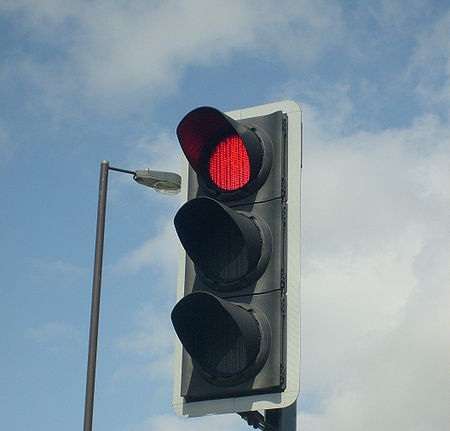 Lately, with the new installation of cameras within traffic lights to help deter drivers from running red lights, scammers are taking advantage of weary drivers and committing identity theft in the process. The word on the street is to be careful of traffic light scams.
Advertisement

Some traffic lights, with new ones joining, are set up with cameras inside to catch speeders who run lights. When caught on tape, these drivers receive a fine for their violation. This can be a great idea to help decrease accidents at major intersections where often horrific calamities, even fatal ones occur because people drive through red lights.

Although a great idea, these cameras within the lights are not always the real deal. Many times when a driver runs a red light, they can escape receiving a fine because the camera does not catch every single driver. However, when a driver does receive a citation, he or she will usually just pay the fine without thinking too much about it or checking on its validity. Well, now is the time to think about it more carefully and question whether the fine is legit or not.

Scam artists have been taking advantage of those who do not check the genuineness of fines for running red lights. Scammers have their tactics down really well and they are getting away with a lot of cash and identity theft as well.

What the thieves do is make a phone call to a random person pretending to be law enforcement. The con-artist tells that person that he or she was picked up running a red light by a traffic light camera and that they have an overdue unpaid traffic citation. Usually the person does not even remember the incident.

The scammer then simply uses a scare tactic to make the person believe that if he or she does not pay their fine immediately, they will be hit with significant late fees, court cases or even jail time. The driver, unnerved, believes the scammer, pays the fine right then and there over the phone and in the process, gives all his or her private information. Scammers ask for credit card information with the security code on the back in order to steal monies that are really not due.

That is not all; however, for the scammer will also ask for billing address, date of birth and Social Security number; the best way to commit identity theft. The unsuspecting victim usually does not realize that the police would already have this information if there was a picture taken of the license plate. However, receiving a phone call one believes is from the police is enough to put many into submission.

The bottom line is to be weary of phone calls that hold any red flags. If a phone call is received asking for any personal information, check out the source first before even answering the person on the other end with as much as your first name. This will help to avoid identity theft.

Anonymous wrote on September 22, 2011 - 6:57pm Permalink
I believe *wary* is the word you are looking for.
Anonymous wrote on October 5, 2011 - 12:34pm Permalink
they're everywhere...when i read reports from callercenter.com, i get the feeling that these scammers are already becoming a part of life...hahaha!
Mr. Dash wrote on October 16, 2011 - 8:08am Permalink
this is so true!!! i got a call once about an unpaid traffic violation i apparently committed and that i have to pay a certain amount or go to jail. it was a guy, a big guy based on his voice, and he did say it with authority. so i got my credit card out right away to settle the fee.. i was about to read my cc number to him when coming from his end, i heard a kid cry, "Daddy! Milk! Milk!"
Mr. Dash wrote on October 16, 2011 - 8:09am Permalink
so beware guys! if you detect anything suspicious, hang up right away and report.