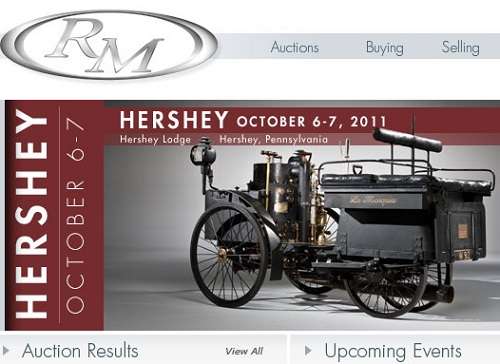 There is some great news for classic car enthusiasts. The 1884 La Marquise will be shown on display on the auction block for all to ogle.
Advertisement

The La Marquise automobile, built in 1884 by De Dion, Bouton & Trépardoux will grace the action block in Hershey, Pennsylvania on October 6, 2011. This automobile is considered to be the oldest road-going original car in the world.

The vehicle, which is a steam-powered Victorian machine was consigned by RM Auctions for its annual Hershey auction. How much is the car worth? Within the whopping estimated range of $2 million to $2.5 million.

No one truly expects anyone to pay that kind of money for the car; however, Gooding’s pre-auction estimate was $1.5 million. It is possible that the RM figure could be the auctioneer’s equivalent of a come-on line, according to the New York Times.

Alain Squindo, a specialist with RM shared this statement in an interview with the New York Times: “A vehicle like this appeals to a variety of collectors, not just automobile collectors. Anyone with an interest in steam technology or industrial history will recognize the significance of the car.”

The La Marquise automobile has been called a quadricycle. It was last up for auction in 2007, which made it a feature in the Automobiles section. The vehicle is known as the La Marquise, after the mother of the Count de Dion, the vehicle’s engineer.

La Marquise was a star attraction at one point when it was in a sale by Gooding & Company at Pebble Beach. That year it was bought by John O’Quinn, a Texas collector who has since passed. O’Quinn bought the automobile for $3.5 million.

La Marquise’s origin is quite significant and of great interest to potentials who may bid on the classic car at the Hershey auction. The vehicle was a part of the first automobile race back in 1887. One owner kept the car for eighty-one years; which could be considered most a lifetime.

La Marquise is a Pebble Beach award winner. It participated in four separate London-Brighton runs, which is a sure “testament to both the dexterity of the design and the stomach of the owner who would drive the four-seater as it was intended to be driven rather than let it gleam in a gallery forever,” according to the New York Times. It was then sold in 2007.

IBA Rider wrote on September 26, 2011 - 11:28am Permalink
The workmanship of these machines is incredible, but this seems more practical than the steam-machine-- http://raceandride.net/site/#/gallery/classic-cars/image-121/ Rather than stopping each hour to chop wood or gather coal, it'd be easier to just pull in for a fill-up (at least till the Arabs cut us off).
Patrick Mothersill wrote on December 10, 2017 - 2:19pm Permalink
Was the 1884 La Marquise the only one of it's kind or were there more than one manufactured?