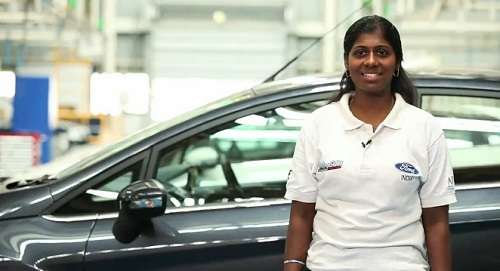 A woman named Sivasankari from India drove the all-new 2012 Ford Fiesta approximately 400 miles on Teacher’s Day so that she could personally thank her teachers for making who she is today. She shares all the wonderful features of the Ford Fiesta as she takes and video-tapes her journey.
Advertisement

Sivasankari is a powertrain engineer for Ford India and wanted to show viewers and potential customers all that the 2012 Ford Fiesta has to offer. First and foremost, Sivasankari wanted to show how incredibly fuel efficient the vehicle is.

Mile after mile and beautiful site after beautiful site, through this video, we get to see how far the Ford Fiesta can drive before needing to fill up on gas. We also see the heartfelt visits that Sivasankari made with her high school and college teachers.

Sivasankari made her trip 400 miles on a full tank of gas, accomplished thanking all her teachers and had a wonderful experience that she will never forget.

Teachers Day is celebrated in India every year on September 5 in honor of a former president of India named President Radkrishna. Dr. S. Radhyakrishnan was the 2nd President of India. He was a renowned Professor of Religion at Oxford University, has several books to his credit and was considered to be a great teacher. Because of this great man, leader and teacher, the holiday Teacher’s Day was formed to be celebrated every year on this great leader’s birthday.

And to honor President Radkrishna, the powertrain engineer for Ford India, Sivasankari shows us what the very high fuel efficiency Ford Fiesta can do, as she drives in the video for miles. She makes many stops on her way, but never needs to fill up with gas.

The Ford Fiesta is a front wheel drive supermini, or also called subcompact automobile. It was manufactured and marketed by Ford Motor Company and has been built in Europe, Brazil, Argentina, Mexico, Venezuela, China, India, Thailand and South Africa.