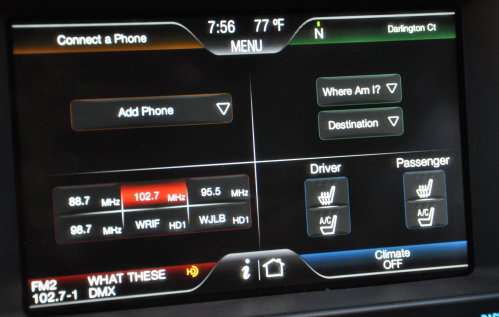 Ford Sync will be available in Europe next year, the problem is that there are number of European languages and the drivers there drive differently.
Advertisement

The Ford Sync is a revolutionary user friendly in-car connectivity system that enables a driver to make hands-free phone calls, control the mp3 player or USB drive, receive audible text messages and more. How does the system do this? With simple voice commands.

Ford Motor Company adapted the Sync in-car connectivity system mainly to help drivers to play with recreational technology safely while driving at high speeds on German autobahns. The system was able to help with navigation as well because there had been some criticism that the navigation system wasn't giving enough advanced notice as to when an exit on the road was coming up, so the Sync system was reprogrammed to give that extra needed warning.

The Ford Sync connectivity system may also be a great way for busy women on the run to drive safely. Many times women may be driving with children in the car, transporting them to and from school, friend’s houses or after school activities. Women tend to do most of the shopping and errand running as well, and with the Sync system in the car, this makes driving a much safer experience.

Now women will not have to worry about using their hands for answering cell phones or changing music while dealing with screaming children in the car. With the Sync connectivity system, ease and stress of driving will be greatly reduced.

Here is what the Ford Sync in-car connectivity system allows you to do:

The interface design engineer for the Sync product is Jason Johnson, who is said to currently be getting the Sync product ready for Europe. After the launch of the Sync connectivity system in North America in 2007, it will be ready for launch in Europe next year.

Johnson has his work cut out for him, for he must program the Sync technology for voice recognition in different European languages. Not only that, the Sync system must allow for how Europeans drive as well, for different cultures have different needs.

You can look for the Ford presentation of the Sync at the IFA consumer electronics trade show in Berlin this week, ending on September 7, 2011. The amazing Sync connectivity system understands 10,000 commands in 19 languages, according to Ford CEO Alan Mulally. By 2015, Ford expects the Sync system to be in approximately 2 million vehicles in Europe. The US already has over 3 million Ford vehicles that are equipped with Ford Sync system.