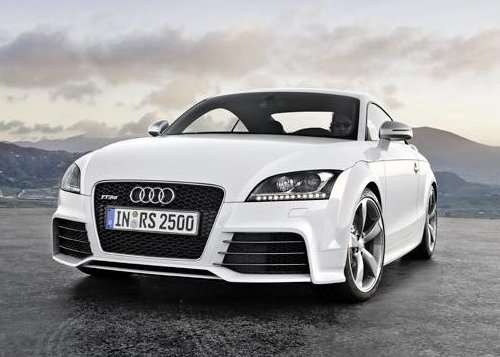 Audi is celebrating its four part video series called the Ultimate Lap. The all new amazing 2012 Audi TT RS reaches 60 mph in 4.1 seconds and stops at a pretty amazing speed as well.
Advertisement

The 2012 Audi TT RS now has a 4 part video series called the “Ultimate Lap.” In the video below, the professional racecar driver named Justin Bell shows us exactly what the Audi TT RS can do, as he races it on the beautiful, yet challenging Monticello Raceway in New York.

The 2012 Audi TT RS performance coupe has 360 hp and quattro all-wheel-drive and is the fastest Audi to date. Justin Bell narrates this amazing 4-part video series of the Audio TT RS in action.

Part one of the Ultimate Lap shows how the 2012 Audi TT RS goes from 0 to 60 industry standard and influenced by several factors: power, weight, grip and Quattro. The Audi TT RS took part in the Apex Challenge on the Slalom Course. It even showed what it can do on wet pavement.

Credit for the Audi TT RS being able to reach the speed of – 0 to 60 in 4.1 seconds was given to its 360 horse power and the unparalleled launch that the Quattro system gives to the car. However, the car doesn’t only have the incredible starting speed, it also has an amazing stopping speed of 60 to 0 in only 91 feet.

Justin Bell describes the car’s stopping power as if someone “threw an anchor out of the back of the car.” He says that the car gives so much confidence on the breaking because of the front rotors which is a huge break package for car the size of the Audi TT RS.

The 2012 Audi TT RS has been compared to the Porsche 911 and comes with “all-wheel drive and turbocharging, which both offer two-plus-two seating”. In the case of our Euro-spec TT RS, both the Audi and the Porsche can be had with seven-speed dual-clutch gearboxes with launch control. The Launch control is largely responsible Audi TT RS’s amazing ability to go from 0-to-60 in 4.1 seconds.

When the Audi TT RS starts, a hug jolt happens as the power is delivered to each tire. The car then shoots forward so quickly that it has been said the driver’s vision actually becomes “slightly hazy.” The Audi TT RS’s five cylinders hang over the front wheels.