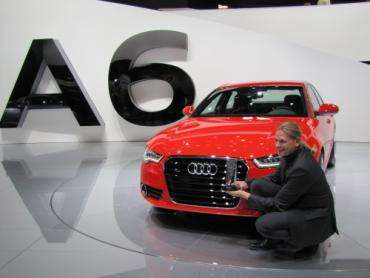 Audi is teaming up with the FX Network to bring to the public a 16-minute short form original drama called “Untitled Jersey City Project”. This joint venture will be featuring the all-new 2012 Audi A6.
Advertisement

This Audi drama will consist of eight different installments, all produced by Audi’s Studio Progress Films. They will appear as small pieces of a television series or film. The premise is to show different pieces of a puzzle involving men working for an architectural firm who are hiding a dark secret.

This drama is a work-in-progress television drama involving story lines centered around fame, power, money and death. As its title partly suggests, it is set amidst the fast-developing Jersey City waterfront.

Audi’s “Untitled Jersey City Project” will be taken over by a seasoned production team, drawn from the amazing New York independent film world. It will be directed by HBO veteran Daniel Minahan, who according to IMDB has been involved in directing episodes of True Blood, Game of Thrones, Grey's Anatomy, the L Word, Six Feet Under, Deadwood and Big Love. Minahan does a wonderful job of bringing this story to the screen with a “stylized, cinematic look.”

In a press release, Scott Keogh, chief marketing officer of Audi of America made this statement, “Audi is excited to partner with FX Networks on this exciting new short-form original series. Since our inception, Audi has embraced creativity, innovation and new ways of thinking. What better way to engage with our progressive audience than through forward-thinking entertainment.”

The first two episodes of “Untitled Jersey City Project” will premiere on Sunday, Sept. 25, and will continue over four consecutive weeks as eight, two-minute episodes. They will all air during FX’s Sunday primetime movies.

According to a press release, “The drama was first announced nationwide last weekend in cinemas and was teased during the Primetime Emmy® Awards telecast on Sunday, Sept. 18, 2011 – features the all-new 2012 Audi A6, one of Audi’s most innovative and technologically-advanced models to date.”

The original drama can be found at www.untitledjerseycityproject.com. By visiting this web address, viewers will be afforded the opportunity to explore the interactive world of Jersey City and find clues to piece together the mysteries from the entertainment concept. In addition, viewers will also be introduced to new storylines and characters, have the opportunity to read work-in-progress screenplays, and engage with the “Untitled Jersey City Project” by offering suggestions for titles of the series.

carbuzz wrote on October 16, 2011 - 1:00am Permalink
Audi sure are spending a hell of a lot at the moment! First the $8million stand at Frankfurt and now this. Couldn't they work on employing some designers to come up with a car that looks different! We've been aggregating reviews for the new A6 and they're really impressive. Though generally the experts are disappointed by the lack of fun it seems they still think it's a decent car.