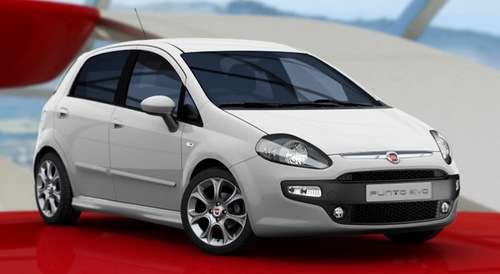 Fiat is doing an emergency styling revamp before the 2011 Frankfurt Auto Show on the Punto subcompact to give it a more conservative look, hoping to reverse a slowing sales trend.
Advertisement

A slightly-redesigned Fiat Punto will debut at the Frankfurt Auto Show on Tuesday, Sept. 13, 2011, with a new front end that Fiat hopes will be less controversial than the one the Punto got in a 2009 facelift (pictured). The new styling will more closely resemble the way it looked in 2005, and the name, which changed to the Punto Evo along with the 2009 facelift, will revert back to simply Punto. The Fiat badge will move down to just above the grill, similar to the original 2005 Punto design that had the badge actually located in the center of the upper grill. The current grill on the Punto Evo was designed to look more like the Fiat 500, with the Fiat badge in between a winged chrome nose piece, remarkably like the old Chrysler badge.

Fiat is counting on the new, more conservative design to reverse a downward trend of the Punto's sales. The Punto, Fiat's best selling model across Europe, ranked as the continent's fourth-best selling subcompact during the government-subsidized scrappage program in 2009, similar to the Cash for Clunkers program in the United States. Fiat sold nearly 350,000 Puntos during that program. However, when it ended, sales of the Punto dropped faster than its rivals - which include the Ford Fiesta, the Opel/Vauxhall Corsa, and the Peugeot 207 - down to less than 280,000 sales in 2010. So far this year, sales have just gone over 130,000, showing a 17.8 percent decline in a segment that has declined at half that rate compared to the first half of 2010.

Fiat will also add a few more fuel-efficient engines to the Punto's range, including a turbocharged 85hp two-cylinder TwinAir engine, which will be both more powerful and put out cleaner emissions than the current 1.2L 69hp naturally-aspirated 4cyl that is offered as the Punto's base engine. The TwinAir engine is expected to get around 57 US mpg, a significant improvement over the 45mpg that the 1.2L engine gets. There will also be a MultiJet diesel engine that boasts an intelligent alternator which will reduce the load on the engine when less charging power is required. That is a 1.3L 85hp engine that will also reduce CO2 emissions compared to the current diesel engine in the Punto Evo.

Fiat has not announced any price changes on the redesigned Punto, but says it will go on sale in Europe at the beginning of 2012.