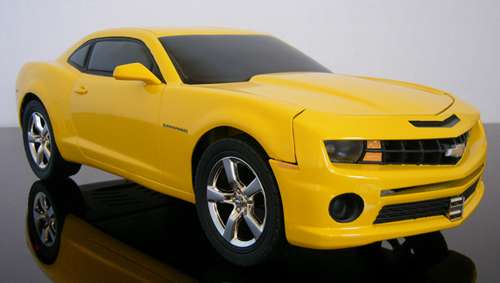 This computer, shaped and styled to look like a new Chevrolet Camaro, would make your car-loving father or grandfather the envy of the neighborhood as it can serve as a very unique Father's Day gift idea for a car loving father.
Advertisement

Father's Day is less than a week away: this coming Sunday, June 19th. By now, your thoughts are probably reeling as to what would be the perfect gift for your father or grandfather, one that he will use for years to come and would be proud to show off to his buddies... in other words, not a flashy necktie.

If your father or grandfather is a Camaro fan, then the Camaro SS series Personal Computer just might be the coolest Father's Day gift ever. Officially licensed by General Motors, it is a fully-functional personal computer that's also a perfect replica of the hot new Chevrolet Camaro.

Now the spec sheet on this Chevrolet Camaro tells you it was built in Silicon Valley rather than Detroit. So, instead of a 6.2L 426hp LS3 V8 and a Tremec TR6060 6-speed gearbox, you'll be getting an AMD 3.2GHz six-core processor, 8GB of SD-RAM and a 1-terabyte SATA hard drive with this Camaro.

But this Camaro PC does a lot more than just compute spreadsheets and play Farmville. The hood ornament is the power button: push it and the headlights light up to indicate the power is on, and the taillights flash when the hard drive is active. The extra bodywork in the front includes the DVD-RW drive in the front bumper and the two USB ports in the lower grill. Finally, all the other necessary ports (two more USB ports, Ethernet, monitor, HDMI-out) are in the lower part of the rear bumper.

It comes pre-loaded with Microsoft Windows 7. It has an internal WiFi card, it's 7.1 surround-sound capable and the only fuel it will ever need is good, cheap 120V AC power.

But the best news of all is that the sticker price on this Camaro is much more reasonable than the real thing: $1200.

This Father's Day gift is available through the website Chevy Mall, along with shirts, hats, and other merchandise for the hardcore Chevy fan.