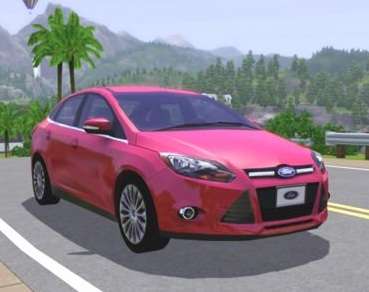 The Ford Focus is now available virtually as a free download for players of The Sims 3, an immensely popular life simulation video game developed by Electronic Arts.

As part of the 'Focus Neon Nights' package, gamers can download a pixelated Ford Focus sedan available in several different colors, with a high-end stereo, a set of neon lights, and a T-shirt for their Sim characters.

The Ford Focus has been part of The Sims video game before, the previous generation being featured in The Sims 2 along with the Mustang GT, Escape Hybrid, Edge, and Fusion.

The 2012 Ford Focus joins the Ford Fiesta in The Sims 3, which was released as part of the 'Fiesta Urban Streetscape' download package last year.

Ford social media specialist Brian McClary said "Our involvement with The Sims 3 demonstrates how Ford is looking for alternate ways to talk to the consumer outside of print, television, and radio. Gaming is a key area we are focusing on and The Sims have proved it can be an effective channel."

The Sims is a video game in which gamers can create lifelike human characters called Sims, give them personalities, construct their surroundings, and give them life goals and desires, and then decide to grant their wishes... or not to.

The Sims 3 has been the most successful launch of the game series to date, according to Electronic Arts, and over 8 million Ford vehicles have been downloaded by gamers.