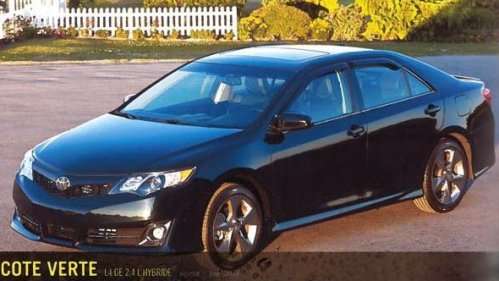 The drumroll to unveil the 2012 Toyota Camry and Camry Hybrid is getting louder. While the seventh-generation Camry will make its public debut at the Automotive Hall of Fame on Oakwood Boulevard in Dearborn, Mich., on Aug. 23, the unveiling will happen at the same time for auto writers in New York, Los Angeles and Georgetown, Ky. Toyota assembles the Camry at a plant in Georgetown.
Advertisement

Today Toyota decided to include the public as part of the introduction by inviting Internet users to join the Japanese car company live in real time via webcast at 1 p.m. Detroit time. That's 10 a.m. in Los Angeles.

This first-of-its-kind reveal for Toyota will include a presentation by Bob Carter, Toyota Division group vice president and general manger, live from Hollywood, and a visit to the Camry plant in Georgetown, Ky., to view the first vehicle coming off of the assembly line, Toyota said in a statement today. In addition, a special NASCAR-related announcement will be made as part of the program.

With the Camry being “America’s Car,” Toyota is engaging the public in this unique event by offering consumers the opportunity to view the program live on Toyota.com and, following the webcast, Carter will host a TweetChat via Twitter.

To view the live webcast and related Toyota materials following the broadcast, please click here on Aug. 23. Link will be live at 12:45 p.m. Detroit time on Aug. 23.

Reporters who arrive at the true introduction in suburban Detroit by 12:30 p.m. will see and hear a formal presentation describing the virtues of the new cars by Jim Colon, Toyota VP of product communications.

Following the presentation and unveiling, Camry cars and Camry Hybrid cars will be available to reporters to drive from the Automotive Hall of Fame, for a few hours. The cars will be in showrooms a month from now.

TN will drive the cars that day and provide readers with impressions by early evening.

A 44-second YouTube video teasing the introduction of the car by Toyota President Akio Toyoda was posted for TorqueNews.com readers by TN Managing Editor Patrick Rall. But that video was taken offline by YouTube after another car company complained of copyright infringement.

In the video, Toyoda spent 42 seconds thanking those who buy the Camry and saying it will be the “best Camry ever” and will “exceed all expectations.” But at the 28-second mark of the video, Rall notes, the camera pans down to Toyoda’s left side as he gestures – giving us our first look at the 2012 Toyota Camry.

This 2-second glimpse of the passenger side headlight of the 2012 Toyota Camry shows a headlight housing that is much larger and runs further into the side of the upper grille opening, Rall reported earlier. He predicts "a far bolder look across the front."

A leaked black-and-white picture of the Camry that is circulating on the Internet shows differences in the headlight housing from the vehicle pointed to by Toyoda, so it's not obvious whether the bad picture that was leaked to the auto press out of Alabama is real or fake.

We'll figure it out for ourselves up close and personal on Aug. 23.

For insiders, the Camry goes by another name: "050A series." It will be assembled outside of America in Australia, China, Malaysia, Indonesia, Thailand, the Philippines and Russia, for sale in foreign markets. This is not confirmed directly by Toyota but is auto press scuttlebut. Take that for what it's worth.

The Camry has been the best-selling car in America for nine years running and 13 of the last 14 years. Since it was introduced in 1983, more than 8.5 million have been sold in the U.S. and 15 million worldwide. Designed to meet the needs of the 21st century driver, the 2012 Camry will provide technologically advanced features, a contemporary design inside and out, improved performance and fuel efficiency, and refined ride and handling, according to a Toyota statement.

Hawke Fracassa writes about new cars and trucks from Detroit for TorqueNews.com. You can reach him at (248) 747-1550 or [email protected] Follow him on Twitter @HawkeFracassa.