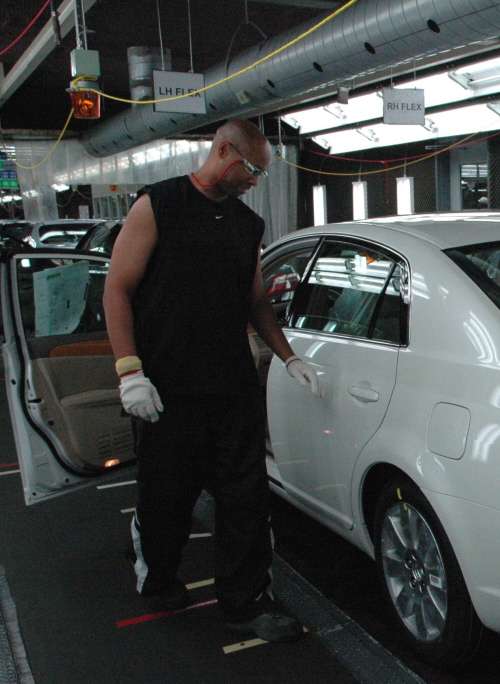 Black Enterprise magazine on Friday named Toyota among its 40 Best Companies for Diversity, the sixth straight year the Japanese carmaker has been so honored for one form of diversity or the other. The annual list is revealed in the July issue of the magazine.
Advertisement

The magazine uses its annual presentation to recognize 40 companies that have demonstrated significant representation of African Americans and other minorities in supplier diversity, senior management, board of directors and total employment. Toyota won its 2011 award for supplier diversity.

The list is compiled based on a survey of global companies with significant U.S. operations as well as the top 1,000 publicly traded companies in America.

“At Toyota, diversity and inclusion have always been among our top priorities, and we are honored to be recognized by Black Enterprise,” said Dian Ogilvie, senior vice president and chief diversity officer at Toyota.

“We believe constant growth toward a more inclusive environment is imperative not only in developing and retaining a talented workforce, but (also) in fostering a corporate environment that mirrors the communities in which we do business. As we remain committed to continuously improving, we will work closely with our senior managers and Diversity Advisory Board to enhance our efforts even further.”

Toyota laid the foundation for its commitment to diversity in 2001, when it launched its 21st Century Diversity Strategy. This initiative set tangible diversity targets for employment, procurement and dealer development.

The impact of this commitment is that Toyota has more than doubled its annual spending with diverse suppliers. Plus, minorities now comprise 30% of Toyota’s workforce.

The Best Companies for Diversity award is among others that recognize Toyota’s commitment to inclusion. Others include:

1. Inclusion among DiversityInc.’s Top 50 Companies for Diversity for five years.

2. Inclusion in the Human Rights Campaign "Best Places to Work Corporate Equality Index" for the past four years.

3. Induction into the Billion Dollar Roundtable, in recognition of over $1 billion in annual spending with certified ethnic and women-owned suppliers.

4. The “Corporation of the Year” award from the National Minority Supplier Development Council.

“The companies selected for ... this list not only demonstrated a commitment to diversity, but (also) viewed it as a business imperative,” said Sonia Alleyne, a Black Enterprise magazine editorial director.

“The strength of Toyota’s network of minority suppliers enables the company to be ... competitive on a global scale.”

Image source: In this picture supplied by Toyota, an African-American worker helps to assemble an Avalon at a plant. Minority employment at Toyota tops 30%.

Roger Clegg, Ct... wrote on July 25, 2011 - 8:57am Permalink
Winning awards like this is nothing to be proud of. Hiring, promotion, and contracting decisions should be made on the merits, and without regard to race, ethnicity, or sex. Unfortunately, corporate "diversity" programs are typically about making sure that decisions are made with plenty of weight given to racial, ethnic, and gender bean-counting. That's too bad, and these companies should be sued, not praised. Re "supplier diversity" in particular: Why do race, ethnicity, and sex need to be considered at all in deciding who gets awarded a contract? It's good to make sure contracting programs are open to all, that bidding opportunities are widely publicized beforehand, and that no one gets discriminated against because of skin color, national origin, or sex. But that means no preferences because of skin color, etc. either--whether it's labeled a "set-aside," a "quota," or a "goal," since they all end up amounting to the same thing. Such discrimination is unfair and divisive; it breeds corruption and otherwise costs the taxpayers and businesses money to award a contract to someone other than the lowest bidder; and it's almost always illegal—indeed, unconstitutional—to boot (see 42 U.S.C. section 1981 and this model brief: http://www.pacificlegal.org/page.aspx?pid=1342 ). Those who insist on engaging in such discrimination deserve to be sued, and they will lose.