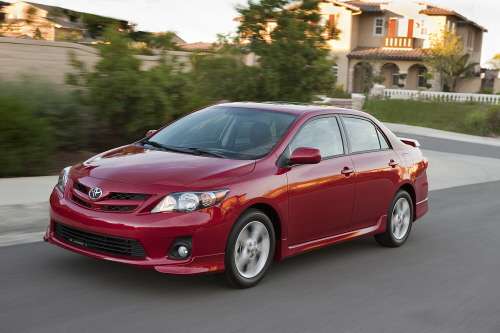 Technological upgrades and adding auto worker jobs in America are high on the agenda for 2012 at Toyota, which aims to make its cars and trucks lighter, better built and more fuel-efficient than ever before, while maintaining or improving safety features.
Advertisement

Advancements set to arrive for Toyota buyers in America in 2012 are the RAV4 EV, Scion iQ EV and a Camry and Camry Hybrid, which will be all new "inside and out," Toyota Motor Corp. President Akio Toyoda said in a statement.

Another technological improvement on the way, Toyoda said, is Toyota’s new Entune system, which is compatible with smart phones. It debuts in a few months on the new Prius v and Camry.

To continue to be an industry leader, Toyota "must earn it with our actions and with our words, with great products and great service and with genuine affection for our customers and our communities,” Toyoda said.

As the U.S. celebrates Independence Day, Toyota reminds Americans that the company is investing in them by creating 2,000 U.S. jobs. The carmaker is opening a production plant in Mississippi, where the new hires will assemble 150,000 Corollas per year, beginning this fall. The investment represents Toyota’s faith in the North American market, Toyota executives said.

Also: While Toyota is working on putting a fuel cell-driven vehicle on the road by 2015 at the same time it is reviewing bio-fuels and what it calls "next-generation materials" to make future vehicles more nimble and efficient than present-day Toyotas.

Toyota continues to have high hopes for the diversification of the Prius, the best-sold hybrid car on the road. The new Prius v offers 60% more cargo space than a standard Prius and is expected to gain wide acceptance as a second vehicle for families who own a standard Prius. Executives believe the 2012 Prius c compact that will be rolled out in March will deliver a car that is fuel efficient and expressive in design. Also coming in 2012: the Prius plug-in hybrid hits the streets.

Production recovery from the March 11 earthquakes in Japan is at 100% right now for the Avalon, Camry, Corolla (pictured), Highlander, Matrix, Sequoia, Sienna and Venza. Production has been in full swing for those models since early June. Manufacturing of the Tundra, Tacoma, RAV4 and Lexus RX is ramping up, with a full return to normal by September.

twilapierce wrote on July 5, 2011 - 2:59am Permalink
As the U.S. celebrates Independence Day, Toyota reminds Americans that the company is investing in them by creating 2,000 U.S. jobs. "Auto Insurance Clearance" will give you a break if you buy two or more types of insurance. You may also get a reduction if you have more than one vehicle insured with the same company.
Anonymous wrote on August 12, 2011 - 9:54am Permalink
It seems that Toyota has a very broad plans in the future. I'm really after their plans for 2015 especially the <a href="http://www.racepages.com/oem/toyota.html">toyota parts</a> of their fuel cell driven and plug-in hybrid.