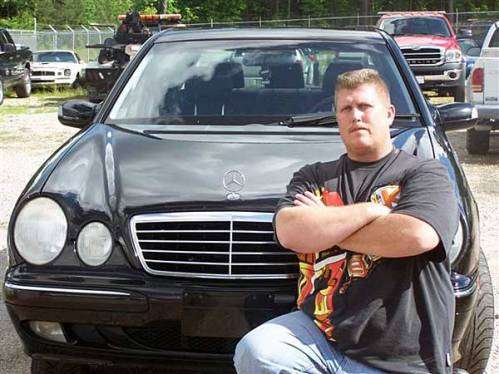 The popular "actuality" ("not reality") series "Lizard Lick Towing" makes its season debut Monday evening on truTV. It features a repo team from Wendell, N.C., and there's never a dull moment as viewers tune in not only to be entertained but also to learn catchy phrases like "a dog is always safe in his own back yard."
Advertisement

"Lizard Lick Towing" began on truTV as one of several vignettes on "All Worked Up," which is a mix of a process servers, meter maids, wrestling-show security guards and licensed repo agents who take back cars, trucks, limos, boats, private airplanes and even pets from deadbeats.

"Lizard Lick" is totally worth watching, if not for the entertainment value of being a fly on the wall as two southern gentlemen repossess cars and trucks and having fun doing it, then for the owner's use of Southern truisms to describe sticky situations. It's Gomer Pyle with license.

The Lizard Lick crew of Amy (the wife), Ron Shirley (the owner, pictured) and Bobby (Ron's best friend and the big guy who holds you down when you mouth off) are more brawn and trickery than finesse. Because Lizard Lick is in Confederate country, the men (and the women) on the show are big, bold, heavy and mouthy. Deadbeats are foul-mouthed, outrageous and violent.

Ron and Bobby are big boys, but they're stealth. They get in and out and giggle like schoolgirls as they drive off, with the steamed R.O. hopping up and down swearing like a wild man in back of them. Most of Lizard Lick's confrontations come when the car owners come to the shop to get their cars back. Things often get ugly, but it's good TV.

My favorite scene was when Bobby and Ron snuck into a race track and repo'd a visiting race driver's vehicle that was parked on the track. As Bobby drove off unmolested, Ron was attacked by four men at the gate and was beat up real good but was OK.

Amy has no sympathy for anyone. She even scorns her husband with regularity. Plus, she throws men twice her size out of the shop. In a rerun that ran tonight, Amy was attacked by a pimp twice her size who was mad he couldn't get a book listing his girl's clients back right away. She held her own as Bobby threw the man out of the shop. Amy showed a soft side by driving the girl home after her pimp drove off. The girl was at the shop to get her Acura back after Bobby pretended to be a client and got her to a motel so Ron could repo her car.

Ron always tells us he's the boss of Lizard Lick Towing & Recovery, but we all know that in reality, AMY is the boss in this family. She always gets what she wants ... unlike the registered owners of the cars they repossess.

Sandra Burch wrote on October 26, 2014 - 11:32pm Permalink
When is the return of Lizard Lick???? 10-29-2014
Shirley wrote on March 2, 2016 - 4:04am Permalink
When r u lizzird lick coming bac on tv
Dallas Abell wrote on April 20, 2016 - 9:57am Permalink
I love youre show plzz reply when dose youre show come back on
BRENDA ITTERLY wrote on March 9, 2017 - 2:19pm Permalink
when is lizard lick coming back on it said in 2017 but what month and is it still on trutv?
hershell lamar ... wrote on December 11, 2014 - 10:47pm Permalink
Lizard lick Return
Gary Stowers wrote on December 23, 2014 - 10:17pm Permalink
Cannot wait for new season!
sherrylynn wrote on December 30, 2014 - 9:54pm Permalink
What happened last night ? I thought lizard lick was going to be on tru tv and when i tuned in to the channel ...It was something else??? What the heck is going on? Not a happy camper !!
B wrote on January 20, 2015 - 6:45pm Permalink
Will there be a new 2015 season of Lizard Lick ?
lowell berg wrote on April 18, 2015 - 11:18pm Permalink
bring lizard lick and south beach tow back on air and also full throttle saloon those are some good ass shows we miss them a lot I wish operation repo was still on too
Vi wrote on October 28, 2015 - 5:23pm Permalink
I AGREE ------BRING THEM BACK
Ronnie galliher wrote on December 19, 2015 - 3:22pm Permalink
Full throttle saloon is back on now just not on truTV. I'm also heard that Lizard Lick towing got cancelled by truTV but they're going to start recording again in January of 2016 is going to come on a different network.
jawaun wrote on August 3, 2015 - 5:58am Permalink
I hope they bring a new season back in 2015 cause they were the best show on tru tv bobby Amy Ronny we all miss u
Betty Gwin wrote on March 9, 2015 - 12:02am Permalink
when is Lizard lick coming back? I really liked it and watched every week
Raine wrote on March 13, 2015 - 6:59pm Permalink
My husband and I moved here 3 years ago. Watched your show from N.Y. For many years. I am personally excited to know we live in Fayetteville, and before I die, I have to meet you all. Amy is beautiful, and the love you and Ron have are like me and my husband. I'm also a redhead and learning to get an attitude. Please contact me. I really want to meet you all! It would make me happy till the day I die. A happy wife is a happy life. My brother is a US Marshal and my cousin is NY state senetor. If you want names, I need proof its you. This does mean a lot to me!
Rick Wasser wrote on April 1, 2015 - 1:09am Permalink
When does the series start in 2015?
jan brown wrote on July 25, 2015 - 4:20pm Permalink
When will lizard lick be back on tv 2015
janet gentry wrote on April 1, 2015 - 7:16pm Permalink
Could someone please let us know when lizard lick is starting it's 2015 season...having lizard lick withdrawl.
JEAN wrote on April 1, 2015 - 7:46pm Permalink
When do the new series come back on i miss the show so bad I enjoy watch it will it be a 2015 shows may God bless Ron & Amy . Love y'all !
dubbautee wrote on April 6, 2015 - 7:14pm Permalink
i think trutv has canceled them. canceled like last year if im not mistaken.
Tim Wamsley wrote on May 19, 2015 - 11:19am Permalink
When do the shows start. And is bobby coming back
jan wrote on July 25, 2015 - 4:22pm Permalink
Will it be back on in 2015
Tina Gurganious wrote on August 27, 2015 - 11:27am Permalink
PLEASE bring back Lizard Lick! I have so much missed Ron and Amy and handsome Bobby Brantley!!! I live just on the outskirts of Wilmington and watched the episode of them going to the North End of Carolina Beach and really wished I was there with them all. I have wanted for sooo long to meet all of you and the rest of your team. God Bless all of you and please come back into our homes via TV!!! I love you all and take care of your little ones!!!
lacheka drish wrote on September 9, 2015 - 5:03pm Permalink
Try TV really needs to bring back Lizzard lick towing that was the only reason I watched that channel that and south beach
Eula wrote on September 14, 2015 - 1:37am Permalink
Lizzard Lick we are wating!!!!!!!!!!!!!! don't forget Juice :)
Larry Hazel wrote on December 18, 2015 - 5:33pm Permalink
I would ke to know when Lizzrd Lick will be back 2016 it was on today Friday 12/18/2015 on True Tv I would like to know when it is coming back on I have DirecTV
almedia wrote on February 3, 2016 - 2:44pm Permalink
when is it comong on in 2o16 please post it on fb
mark wrote on September 8, 2019 - 12:42pm Permalink
when is the new season of lizard lick come on and witch channel pls let me no
BRENDA ITTERLY wrote on September 11, 2019 - 7:34am Permalink
i love this show especially bobby