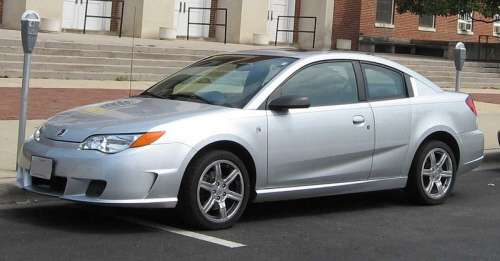 GM and UAW will revive plant where Ions, other Saturns were made

The Saturn Ion was a great compact car for first-time car buyers as the Saturn brand was limping on its last legs. The affordably priced Ion was one of the last vehicles of the almost 4 million vehicles that were made by Saturn at the factory in Spring Hill, Tenn., over the course of 17 years. That same plant is expected to be resuscitated as part of the pending contract between General Motors and the UAW.
Advertisement

The four-year pact, which delivers job security to veteran auto workers and raises of up to $3 per hour to entry-level hires who right now make about $14 hourly, should be ratified this month. And it could be the impetus to revive Spring Hill, where only 1,100 auto workers from the previous staff of 3,000 have built engines since the line shut down. Another 500 people will be hired soon to handle the growing workload.

Before seeing where Spring Hill can go, it is important to know where it has been, to understand its heritage.

The end of the line was brutal. As Saturn was shedding production duties in Tennessee so instead it could assemble its cars in Michigan, Georgia, Delaware, Kansas, Mexico and, later, even Belgium, it was the Ion that was chosen to stay at the assembly plant near Nashville that had become iconic as the home of Saturn's import-fighting automobiles in the early 1990s.

Before the $12,000 Ion's demise in 2007, its main mission was to take aim at younger buyers with its edgy styling and strong 2.2-liter engine. It was replaced in 2008 by the Astra, a European mainstay assembled by Opel.

The writing was on the wall for the Ion near the end. Although few could forecast the death of the popular Saturn brand, what was obvious was that the Ion had no future because before things went south financially for General Motors, it had plans to make Saturns more tony and, in turn, more expensive.

While internal plans were afoot at General Motors to market Saturn to snootier, more label-driven buyers who could afford to pay more, it never got the chance, not really, to go much beyond the original mission of making simple cars that you buy from friendly, no-muss-no-fuss-no-hassle dealers. The original formula worked for a long time. Surveys consistently showed that buyers of Saturns made at Spring Hill were more satisfied with their cars and their dealers than buyers of other brands.

The last Saturn Ion delivered 35 miles per gallon and had two body styles and three trim levels -- Ion 2, Ion 3 and Red Line. Besides the standard small sedan, there was the “quad coupe” body style that showcased two reverse-opening access doors.

The Ion Red Line (pictured) was powered by a supercharged 2.0-liter 4-cylinder engine that pushed out 205 horsepower. The Red Line also came only as a 5 speed.

The Ion 2 came with the basics: Power locks, OnStar and a CD player. A Preferred Package added power windows and mirrors, cruise control, a driver-seat height adjuster and keyless entry.

The Ion 3 had everything on the Ion 2 and the Preferred Package plus 16-inch alloy wheels, air conditioning and an anti-theft system. An upgrade was an Enhanced Performance Package that included a more powerful engine, sport-tuned suspension, anti-lock brakes and traction control.

The performance-driven Ion Red Line came only as a quad coupe and featured 17-inch alloy wheels, a lowered sport-tuned suspension, leather sport seats and most of the Ion 3’s equipment. Options included a choice of rear spoilers and the Red Line Competition Package that added a limited-slip front differential, painted alloy wheels, a boost gauge and a programmable “ladder” tachometer that lit up when certain rpm levels were reached.

The quad coupe offered dual rear-access doors. Combined with a front-passenger fold-flat seat, the rear-access doors, which opened rearward almost 90 degrees, maximized the interior space by making it easy to load and unload passengers and cargo. Through this design large objects that would not typically fit in a compact car slide in with ease.

The rear doors had no exterior handles to compromise the coupe’s sporty styling. Saturn executives told reporters at a short-lead preview 2007 that it was possible to put a 9-foot kayak into the coupe through its doors.

Although the Ion is a compact car, offered lots of headroom due to its high roofline. The front seats provide longer-than-normal adjustment rails as well. A short front-seat passenger can slide forward to allow more legroom for someone in back, while a tall front passenger can take advantage of expansive leg room when no one is sitting behind.

Rear passengers enjoy good headroom and the rear seats are mounted 2 inches higher than the front seats, giving them a better view out front. Rear-seat legroom is adequate for a compact.

With a capacity of nearly 15 cubic feet and a flat floor, the sedan’s trunk was big for a compact and was, in 2007 at least, as big as those in many mid-size cars.

The Ion has composite polymer body panels that can’t rust and, because they are resilient, they resist the minor impacts that leave small dents and dings in sheet metal. The composite panels are still easy to replace. Saturn used this fact to make the Ion highly customizable by offering alternatively colored roof rails that owners can easily install themselves. Nickel-Silver roof rails were available for the coupe and sedan, and Charcoal rails are available for the sedan only.

This made Saturn a modern day Burger King: Both companies want to let customers "have it your way." Such thinking is what made Saturn a rousing success, until GM broke up the Yankees.

To read about what's next on Tuesday in Detroit, CLICK HERE:
http://www.torquenews.com/1063/whats-next-gm-uaw-contract

To read about the pending GM-UAW contract, CLICK HERE:
http://www.torquenews.com/1063/ratification-next-step-4-year-gm-uaw-contract

To read about the money GM's UAW members will get, CLICK HERE:
http://www.torquenews.com/1063/show-me-money-what-uaw-got-gm-workers-new-contract