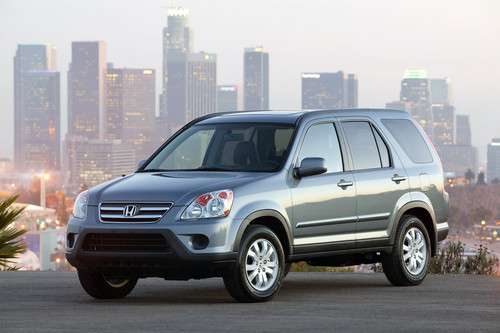 Honda issued a statement early this Labor Day morning saying that due to safety concerns it will voluntarily recall about 90,000 2006 CR-Vs and 2011 CR-Zs that were sold in the United States. A total of 962,000 vehicles are included in a larger, worldwide recall that adds the Fit to the mix, according to reports from the Associated Press, Bloomberg and the Washington Post.
Advertisement

Honda will formally notify affected owners later this month so they can bring the vehicles in to pre-empt safety problems.

The Japanese car company announced it will recall 80,111 CR-V vehicles from 2006 (pictured) to replace a power window master switch. Here's why: Honda has learned "the design of the power window master switch can allow residue from interior cleaners to accumulate, which can, over time with switch use, cause the electrical contacts to degrade and may lead to a fire in the switch."

Honda also is voluntarily recalling 5,626 2011 CR-Zs that have manual transmissions. It's doing this to update software that controls the hybrid electric motor because when "the gasoline engine has stalled with the IMA battery in a very low state of charge and the transmission in gear, it is possible for the electric motor to rotate in the direction opposite to that selected by the transmission."

The impact of this is that if the driver "has not engaged the brakes, the vehicle may slowly roll in an unexpected direction (for example, backwards when the transmission is in a forward gear), potentially leading to a crash."

A software update will correct the problem by adding controls.

Owners of affected vehicles will be advised to take their vehicles to an authorized Honda dealer as soon as they receive formal notification of the recall in the mail, by the end of the month at the latest. No injuries or deaths have been reported with either voluntary recall.

If owners do not receive a letter by October, Honda is advising them to go to recalls.honda.com or to call 1-800-999-1009. After calling, choose option 4.

Honda Driver wrote on September 5, 2011 - 7:10am Permalink
Different news agencies report different numbers on about this Labor Day recall. For example, WSJ reports that Honda is recalling 962,000 cars worldwide. AFP reports 936,000 vehicles globally involved in this recall. It seems that Honda Fit is the most affect car model involved in this recall as number of headlines read that Honda is recalling "nearly one million Fit and other models."