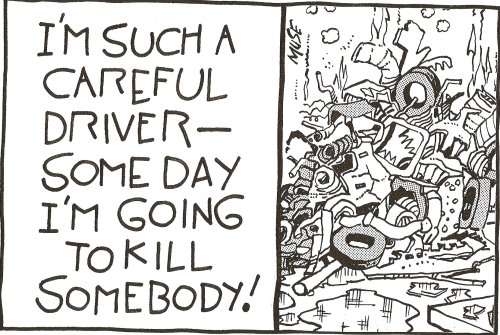 Driving tests: Men are better than women, but both sexes are failures

LeaseTrader.com reports after quizzing 500 men and women about their driving habits that men are more likely to get answers on a driver's test right than women (59% to 46%). At the same time, results show both sexes need to brush up on their studies because 75% of test takers flunked.
Advertisement

Women had the most trouble with questions about speed limits.

“It may be time to take a closer look at the way in which we test drivers,” Dan Edmunds, director of vehicle testing for Edmunds.com, said in a statement. “The United States has a far less rigorous training and testing process than many developed countries – and a much higher per capita rate of fatal accidents.”

A separate survey mirrors these results. A GMAC Insurance survey of about 5,100 people showed 22% of Americans would flunk a driving test.

That means almost 37 million drivers are unfit for the road, an uptick from the 38 million misfits who couldn't pass the test last year.

The impact of failing the test means legal drivers are unsure of themselves when it comes to following the rules of the road.

The worst drivers, according to the GMAC survey, are women and neophytes. Men are twice as likely to pass tests, data shows, and senior-aged drivers score a B or better (over 80%) on driving tests.

Midwest drivers and people from Wyoming are the best; people in the Northeast and in Washington, D.C., fare the worst.

Anonymous wrote on May 29, 2011 - 10:32am Permalink
I'm a female and I scored 95%...of course I live in Colorado, so it seems they are correct in their assesment.
Anonymous wrote on June 1, 2011 - 3:36pm Permalink
There is more to driving than knowing the right answers. My wife is a fantastic driver but scored a 60 something. I did better, but I am more a better extreme conditions driver than her (and a much worse navigator)