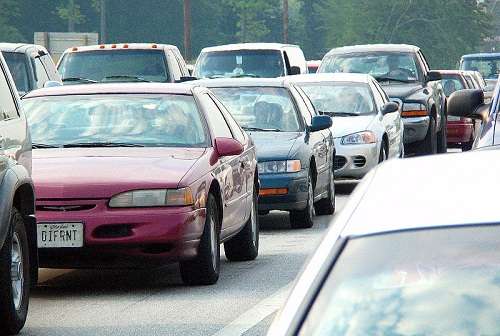 Driving in our cars makes us sedentary and overweight unless we take steps to change that. This according to a University of Illinois study that ties commuting in a car to obesity.
Advertisement

“There is no doubt that we are a car-centric society,” Prussia Hall, a personal trainer at the "every Body" fitness center in suburban Detroit, said Tuesday. “We drive everywhere, even distances that could be easily reached by walking. That’s just part of our lifestyle.”

Contributing to the erosion in our health as drivers is buying food from the drive-through windows at McDonald's, Wendy's, Taco Bell or Burger King to eat in the car as we commute from Point A to Point B.

“We’re eating a high-calorie meal while sitting in the car,” Hall said. “Not only that, but we also bank and pick up our prescriptions at a drive-through window, which means we hardly ever get out of the vehicle and walk anywhere, so we don’t burn all these calories we take in. This behavior ultimately leads to obesity.”

Statistics show America has the highest number of obese people worldwide. Every 1 of 3 Americans is overweight by at least 30 pounds.

“Obesity is dangerous because it can lead to type 2 diabetes, heart disease, and many other serious health conditions,” Hall said. “Of course, the car alone cannot be blamed. ... There are other contributing factors at play, such as poor eating habits and sedentary lifestyle.”

But even active people can be porky. Soccer superstar Diego Maradona was heavy, then lost the weight and kept it off. Elvis went from thin to grossly obese. Actor Jack Black and actress Queen Latifah have adoring chubby-chaser fans, even though they're rotund. But experts argue they would be healthier and have fewer health risks if they trimmed themselves down.

For people who spend hours every day in their cars driving, it is crucial to pack in a workout into their schedules if they want to thin down. The U.S. Centers for Disease Control and Prevention recommends a minimum of a half hour of "moderately intensive" activity every workday and muscle-strengthening exercises two times per week. More than half of us don't do that and a quarter of us are completely inactive, many studies show.

A solution is to walk more and drive less to short destinations, for your own health's sake.

"The key is moving fast enough to get your heart rate up," Hall said. "Remember such common-sense precautions as low-heel, flexible-sole, well-fitting shoes.”

back pain sacramento wrote on June 9, 2011 - 7:10am Permalink
I also greatly appreciate this site.Thanks in advance for your cooperation with the above conditions. I hope you find it useful.It helped me with ocean of knowledge so I really believe you will do much better in the future I appreciate everything you have added to my knowledge base. Thank you for the good you do here it is valuable to us...