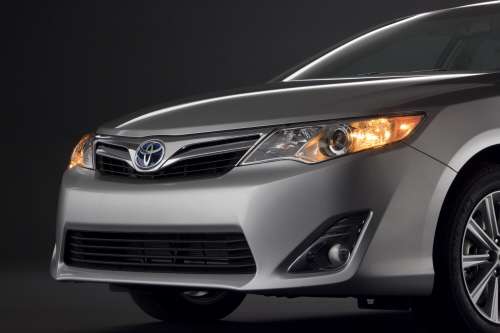 With the hoopla over the all-new 2012 Toyota Camry dying down, the Japanese carmaker is seeking to revive the frenzy. The next step in doing that takes place next month in Florida, when Toyota hosts two single-day ride-and-drive luncheons for the automotive press to drum up more interest in this 2012 Camry.
Advertisement

Test drives of the redesigned flagship car for invited members of the southeast U.S. auto press will begin at The Coral Gables Country Club in Miami.

Toyota will allow reporters to drive Camrys on Oct. 10 and Oct. 11. Reporters will drive different versions of the cars, eat lunch, hear a marketing presentation from Toyota executives and get a walk-around of the car, highlighting all of its new features for 2012, said Richard G. Kelley, southeast public affairs manager
for Toyota Motor Sales.

The Camry (pictured) will be available for the auto press to drive on local roads.

Here were my first impressions of the Camry when I road tested it in Detroit:

After all of the hype and hoopla, I expected a lot more than I got from the 2012 Toyota Camry SE when I drove it today.

There's nothing wrong with this new Camry, not really, but I was expecting something more powerful, more elegant and more ... memorable. Something cool.

The SE is supposed to be the car that snags Toyota buyers who are younger than 60. The car "with attitude," as NASCAR driver Denny Hamlin called it today.

But when I took a grey lady test CamrySE onto the streets of Detroit, Dearborn, Melvindale and Taylor, Mich., today, nobody looked at the car. NOBODY. Nobody stared. Nobody asked me anything, even though my windows were down at traffic lights.

There was no head-turning quotient. NOTHING. It was like I was the ugly girl on my first day of school. People looked at the car, but didn't SEE the car. Maybe if I had taken the red sedan they used earlier that day to introduce the car, maybe then someone would have at least given the car a passing glance.

That is not to say the 2012 Camry SE really is ugly. It looks OK. But it's no knockout. It's Plain Jane. As vanilla as they come.

The new Camry has virtues, but beauty isn't among them, not really. It's conservative and understated, at best. Nobody is going to rob a bank or even a 7-Eleven to get the money to buy this car.

To me it was a Fred Flintstone car: Underpowered. On the freeway it didn't roar. It moseyed. That is not to say it is defective. There are going to be people who want to be invisible. But if you pretend to be NASCAR-worthy, you need more oomph than what I drove today.

The trunk space is impressive. A Teamsters enforcer would love it. But most of our lives are more sedate than that.

If you're a businessman who usually takes a lot of luggage on trips or a woman who needs a lot of trunk space for your big family's groceries, this might be an excellent vehicle for you. I like how the spare tire is underneath the change-the-tire tools. (As if somebody with a Camry is changing his or her own tire. C'mon!)

There are some nice things. The steering wheel felt comfortable in my hands, the seats were cushy, the back seat was a nice size and the side mirrors were easy to adjust.

The new Entune system was daunting, but maybe that's because I'm 52 and I'm not a techno freak. But there are bigger concerns.

The SE's acceleration was imprecise today. I couldn't trust the car to thread the needle at expressway speeds. Maybe if I had driven the car for more than a few hours, that comfort zone could be developed. But my first impression is that this Camry does not deliver what I have seen in Camrys from former years. I loved the 2011 Camry.

But the preproduction 2012's brakes were not as responsive as I would have liked. I bunny-hopped at a red traffic light and when slowing down on the freeway instead of stopping immediately.

The instrument panel was confusing. I had trouble at first figuring out how to turn off the radio. I had a passenger figure out how to make the air conditioning work, after the temperature rose past 84.

The 2012 Toyota Camry LE Hybrid sailed through the streets of suburban Detroit more deftly than the other Camrys I drove today. Smooth, quiet and almost as responsive as it needed to be.

Just like the SE that I had driven an hour earlier, nobody really took notice of how it looked, but as a Point A to Point B car, it fared fairly well.

I found the hybrid roomy, comfortable and easy to handle. I looked under the hood and liked what I saw. Everything was well organized, as were all of the ECO gauges.

Toyota officials said today that the Camry will continue to earn its position as America's best-selling car. If you're thinking of buying a Camry Hybrid, get the V6 so you don't feel underpowered. Like the other Camrys I drove today, this one lacked oomph. The V6 is your best bet to get that push the car needs. Toyota predicts only 11% of buyers will get the V6, but if that is true, it does a disservice to the buyer.

The best reason to get this version of the seventh-generation Camry is its mpgs: 43. Wow.