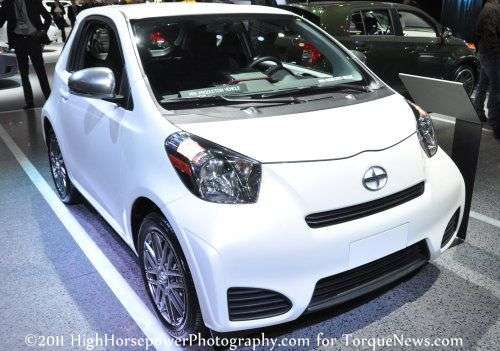 2012 Scion iQ coming soon to a dealership near you

The ubiquitous 2012 Scion iQ will sticker for less than $16,000 when it is trotted out for sale in various U.S. regional markets over the next six months for buyers who seek to set trends instead of following them.
Advertisement

Scion has chosen to make the 2012 Scion iQ available in waves, starting with California, Scion Vice President Jack Hollis told reporters at the College for Creative Studies in Detroit on Wednesday at a ride-and-drive event.

The timetable for the Scion iQ's release is clear. It comes to Scion dealerships on the West Coast "later this fall." It will arrive in Southeast and Gulf States dealerships in the first quarter of 2012, followed by New York. The iQ launch will culminate with deliveries to the East Coast and Midwest in March.

Hollis calls the introduction of the 2012 Scion iQ to the marketplace part of an "exciting, busy time" for Scion.

"Last year we launched the all-new, second-generation tC. Better in every possible way, it was well received by Scion owners – both new and existing – when it reached Scion dealerships last September," Hollis said. "The tC immediately increased showroom traffic … contributing strongly to sales increases for all three Scion models. And it continues to have the youngest median-age buyer in the industry. Shortly after launching the tC, we switched gears to talk about another very sporty car for Scion.

"A few months ago at the N.Y. auto show, we unveiled the FR-S, a sports-car concept that will rewrite the definition of what an affordable sports car can be. FR-S stands for Front-engine… Rear-wheel drive … Sport. But you’ve probably heard that I think it could stand for 'Friggin’ Really Sweet.' While we’re still a few months away from really getting into the FR-S, I’m personally pumped up about where this sports car will take Scion. It’s a fun to drive ... no, scratch that ... it’s an 'Awesome to Drive' car that offers performance that hard-core driving fanatics can only find in a rear-wheel drive. This car will be the perfect daily driver AND weekend warrior."

Hollis contends the tC and FR-S are helping to launch what he calls a “new dimension” of Scion. While both of those cars are adding a big dose of adrenaline with a young buyer who aspires for even more, the 2012 Scion iQ pushes Scion into another, very different direction.

"When we debuted the xB eight years ago it created an iconic vehicle that in many ways symbolically represented what Scion was in the early years of the brand," Hollis said. "And because it was a vehicle that grew to be more than 'just a car' to its owners, it has been imitated quite a bit. But what has made it unique and never been duplicated, is the special connection that xB owners have for their car.

"The iQ will do the same as it ushers in a 'New Urbanism' – a vehicle for a more progressive buyer whose transportation needs and desires are changing. While it will expand the Scion family to a fourth member, and the first all-new model since the tC launched in 2004, it will mean much more than that to Scion. It’s a premium micro-subcompact that will no doubt expand Scion into yet another 'dimension.' ”

Hollis says the iQ will "inherit the Scion DNA of authenticity, community and personalization." The Scion brand, he argues, "has accomplished exactly what the company hoped for when it launched. We're an investment in Toyota’s future."

There are at least four reasons for that:

1. More than 70% of Scion owners are new to the Toyota family.

2. The new buyers brought into the family are kept. Eight out of the top 10 vehicles that Scion owners trade into are either Toyota or Scion vehicles.

3. Scion buyers are the youngest in the industry.

4. Scion has become the most ethnically diverse among non-luxury brands sold to Americans.

"Scion has always been about setting trends that really fit with people’s new attitudes, new desires and new lifestyles," Hollis said. "And that’s really one of the reasons that the iQ will be a Scion here in the U.S. What the iQ is all about fits in with Scion, and it fits in with urbanites who will take it home with them and make it a part of their lives.

"The iQ will be about big ideas ... concentrated. It will take its own unique approach to urban mobility, with a style that will turn heads. The iQ will define a new, premium micro-subcompact segment with a level of innovation that makes a car of this size possible.

"It will attract youthful trend-setters who desire innovation above all else. The iQ is the future – a small footprint that appeals to their sense that a car should not be any bigger than it really has to be and one that is easy to drive and park in the city."

The iQ has stuff on it that appeals to smart, young people.

"I’m talking about a car that is small in size, but big on innovation," Hollis said. "A car that uses intelligence instead of sacrifice, giving owners both an unparalleled car of its size but with comfort, safety and entertaining features. ... And its size doesn’t forgo safety. It’s amazing that a car this small not only has an industry-best 11 standard airbags, including the world’s first rear-window airbag, but it also has all of the safety and security features that drivers want, like the Star Safety System, Vehicle Stability Control and traction control, among others."

The iQ name is a combination of “intelligent Quality,” the result of combining the best technology in a small, clever package. The “i” also stands for “individuality,” with a style that is unique and makes a statement about its owner. The “i” also represents the “innovation” needed to create a dynamic vehicle in a 10 foot-long package.

"The iQ’s concept really began by envisioning who its customers would be and what kind of designs would interest them," Hollis said. "We did focus group interviews of young urbanites who are fashion conscious, consider themselves trend setting rather than following, and like a level of sophistication in their lives.

"When designing a car that would ultimately be 10 feet long, we had to make sure it didn’t appear unstable or weak. It had to have a sense or strength and stability. This led to the second iQ design concept of Stability and Dynamism. To achieve it, we thought outside the normally prescribed proportions for a car and gave it ... a 'perfect imbalance.' The iQ has a broad, stable look with a width of 66.1 inches and a height of 59.1 inches, to go with the 120.1 inches in length. And the wheels are placed as far as possible at the four corners of the iQ."

Space between the front seats is greater than in a Toyota Yaris, and comparable to a Toyota Corolla.

"With a turning radius that is under 13 feet, it has outstanding maneuverability in tight alleyways, parking garages and when parallel parking in congested areas. The iQ’s wide stance for its size and aerodynamic shape also give it great highway stability."

The iQ, Hollis says, "is a revolutionary idea on the efficient use of space in a vehicle. Its small size contrasts with its large capability ... the world’s smallest 4-seater that gives people the flexibility they never thought possible,. with the ability to take friends and gear where they need to go."

A 50 / 50 fold down rear seat and hatchback access provide room for groceries, gym bags, suitcases or sports equipment. The iQ will be mono-spec, presenting a simple purchase with a mix of standard features and benefits.

"The iQ will be easily personalized," Hollis said. "With over 25 accessories, we hope that no two iQs will be identical. To give you a better idea of how owners will personalize their iQs, some of the accessories available at dealerships include audio, fog lights, alloy wheels, a lowering kit and a rear spoiler."

Before the iQ goes on sale, there will be a “I Am Going to Be Big” pre-launch campaign that will hit television and print.

"As the iQs get closer to arriving at dealerships, we’ll go into launch mode with a campaign called 'iQ … Therefore I Am.' These spots will focus on the car’s features and highlights, calling out actual figures such as turning radius," Hollis said. "This is something that is really new for Scion, and the iQ is the perfect car to experiment with.

"We’re really having a lot of fun with this car as it takes the brand into new places. It will give us a chance to experiment and talk to people whom we’ve never talked to before. And we’ve already heard from some of our current owners, who’ve really been excited and are looking forward to the iQ."

The iQ will come to Scion dealerships on the West Coast "later this fall." It will arrive in Southeast and Gulf States dealerships in the first quarter of 2012, followed by New York. The iQ launch will complete in March, when it comes to the East Coast and Midwest.

You can reach TN automotive reporter Hawke Fracassa at [email protected] or (248) 747-1550. Follow him on Twitter @HawkeFracassa.