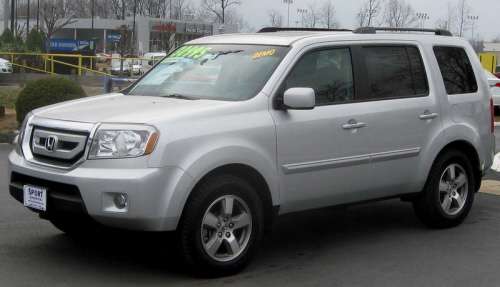 Honda announced a recall this evening of 310,773 Pilot SUVs from the 2009 (pictured), 2010 and 2011 model years to inspect and, if necessary, to replace driver and front passenger seat belts.
Advertisement

At the same time, Honda is conducting recalls of at least three other vehicles in the United States: They include 90,000 2006 CR-Vs and 2011 CR-Zs that were sold in America as well as 962,000 vehicles that are part of a larger, worldwide recall that adds the Fit.

Honda said in a statement the recall of the Pilots, which were all assembled in Lincoln, Ala., is needed "due to a manufacturing error on a small number of front seat belts, where the stitching connecting the lap section of the belt to the outboard anchor webbing may be incomplete or missing."

In a crash, "affected seat belts may become disconnected from the anchor webbing, increasing the risk of injury." Nobody has been hurt because of this, so far.

Owners of affected vehicles are advised by the company to take their trucks to a Honda dealer once they have received formal notification of the recall in the mail. Honda said in the statement today that "the only way to concretely determine whether the seat belts in an affected vehicle were properly completed is through a specific inspection process conducted by an authorized dealer."

The inspection and replacement parts, if needed, will be free to Pilot owners. Written notification to customers will begin in October.

John Paul wrote on September 12, 2011 - 11:22am Permalink
How is this issue?Why would Honda replace some of its parts?