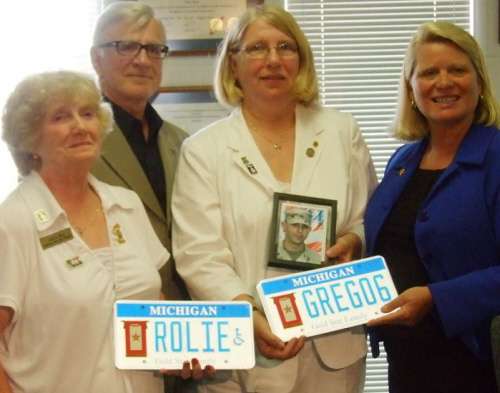 The first special Gold Star Family license plates in Michigan have been purchased by Army moms at the Gus Harrison Correction Facility in Adrian, Mich., about 90 miles southwest of Detroit.
Advertisement

They both selected personalized Gold Star Family plates to honor their sons.

As Johnson (far right in the picture) made the presentations in Adrian, state Sen. John Pappageorge was there to meet May and Johnson and to pay his respects to their fallen sons.

“I don’t think there is a better reminder than Mrs. May and Mrs. Johnson that freedom isn’t free,” Johnson said.

“This week, when we celebrate our freedom on the Fourth of July, seems especially appropriate to launch the Gold Star plates so we can honor those who gave the ultimate sacrifice and their families.”

The legislation to create the special license plates for cares and trucks was sponsored by state Sen. Pappageorge, R-Troy, and state Rep. Robert Genetski, R-Saugatuck. Pappageorge, a retired Army colonel, was in the service for 30 years and had two tours in Vietnam.

“This plate serves as a symbol of the sacrifice these American heroes have made,” Pappageorge said. “I’m thankful that the state of Michigan is now recognizing their great sacrifice.”

Gold stars have been used to identify families who have lost their children in the service since World War II. Blue stars on window flags denote families with someone serving; a gold star signifies the death of a service member.

“My new Gold Star Family plate will hold a special place in my heart like no other plate I’ve had before,” May said.

Gold Star Family plates cost $5 in addition to a vehicle's standard registration fee. People with questions about the Gold Star plates may call 1-888-767-6424.

About the image: Michigan Secretary of State Ruth Johnson and Sen. John Pappageorge of Troy present two moms who lost their sons in U.S. military service with the first two Gold Star Family license plates in Michigan. The ceremony took place at the Gus Harrison Correctional Facility in Adrian, where the plates are made. Pictured, from left, are are Valerie May of Midland, state Sen. Pappageorge, Carol Johnson of Howell and Secretary of State Johnson.