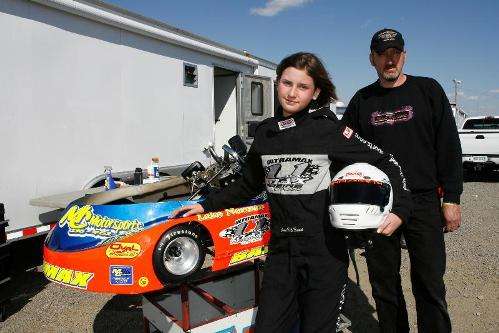 The PBS POV project "Racing Dreams," which chronicles a year in the life of three tweens whose American dream is to become victorious Sprint Cup NASCAR drivers, is a poignant story that has won international acclaim, even before it has been aired.
Advertisement

The movie, which its creators call "Talladega Nights meets Catcher in the Rye," has already collected Best Documentary awards at the Tribeca, Indianapolis and Jacksonville film festivals. It airs for the first time on commercial television at 9 p.m. Eastern time on Feb. 23, on PBS channels nationwide as part of the PBS POV series.

The storyline of "Racing Dreams" is simple enough, and easy to explain. It is a funny yet heartbreaking portrait of racing, young love and challenges faced by American families.

Though the young protagonists aren't old enough for driver's licenses, Annabeth (11), Josh (12) and Brandon (13) race extreme go-karts at speeds of up to 70 miles per hour in the World Karting Association's National Pavement Series. For purposes of discussion, consider this the Little League of professional racing.

The film is directed by Marshall Curry (Oscar-nominated "Street Fight," POV 2005; "If a Tree Falls," POV 2011) and executive produced by Dwayne "The Rock" Johnson.

So who are these new stars?

Annabeth Barnes of Hiddenite, N.C., is the talented daughter of a retired racecar driver. She spends nearly every weekend at the track and struggles to balance a love for racing with a desire to be a regular kid.

Josh Hobson started racing at age 5 and is bright and focused beyond his years, the producers say. He lives in Birch Run, Mich., north of Detroit. He studies both the driving styles and interview techniques of Sprint Cup drivers. He and his family understand that success in this sport requires professionalism above all.

Brandon Warren of Creedmore, N.C., lives with his grandparents and is funny and charismatic, the producers tell reporters, but his hot temper has gotten him into trouble. In the movie, he is in the running to win the championship that he lost when he was disqualified for rough driving. With a difficult home life, he experiences racing as both a passion and as an escape.

Here are the creative talents behind the production:

Here are the POV execs who made the movie happen:

Toyota's First EV Will Have a Name of BZ: Toyota BZ
First Videos From Inside The Boring Company's Las Vegas Loop
END_OF_DOCUMENT_TOKEN_TO_BE_REPLACED