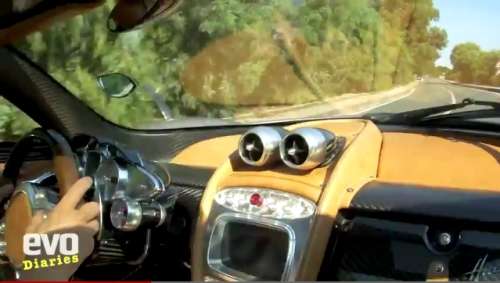 Video: The Pagani Huayra will ruin your life with its awesomeness

There is no car on this planet that tickles my insides the way the Pagani Huayra does. In fact, there is nothing I won't do to simply be able to drive one, let alone own one. As proof of this statement, here is but a small list of the things I would do:
Advertisement

1.) I would marry Amy Winehouse.
2.) I would be a zookeeper at the velociraptor tent at Jurrasic Park, and neglect any and all safety standards.
3.) I would cover myself in bloody meat and fist fight a Great White Shark in a swimming pool.
4.) I would get into the front half of a donkey costume and roam about the African Savanna trolling for predators
5.) I would even, (dare I say it?) insult a Honey Badger's mother.

If you haven't seen it yet, do yourself a favor and don't. It will ruin your life. It will prevent you from doing any work at your job. Which in turn will get you fired. This will cause you to lose your house and then move in with your parents. Afterwards, you'll end up in nothing but your white undies looking at the computer screen of pictures of the Huayra, only to act all embarrassed and quickly close the screen when your mom walks in. This is what the car will do to you.

The interior is unlike anything I've ever seen, everything looks like it was copied from an alien spacecraft just covered with aluminum, carbon fiber, and leather instead of space-alien plastic (or whatever they have.) Who on this earth could have designed the interior? I can only imagine that the same man who invented the time machine designed it after spending years looking at future designs first hand.

The outside is of course a beauty held by the beholder. But if you think it's unattractive you're probably blind, cranky and unpleasant. The machine has active wings that constantly change and move to create the ultimate down force and best aerodynamics for the car in that very second. Who does that? What other car in the world can even boast that?

Just watch and listen to this video by EVO magazine. While I watched it, I grabbed my desk and tried to crush it with my bare hands, I wanted to be in that car sitting next to Horatio Pagani himself, asking him a million questions in Argentine Spanish (we're both from Argentina you see.) and begging him to let me sweep his floors for free.

I'd write more, but my mom walked in and I had to quickly shut off my screen.

will wrote on July 25, 2011 - 11:18am Permalink
I think you can strike the first one off your list unless you are into necro.
Roman Rosa wrote on July 25, 2011 - 3:25pm Permalink
I know.... 24hrs later after writing it, she died. However, I will still stand by that statement even today as further proof of my desire to drive that car.
Lewis Cannon wrote on August 4, 2011 - 8:19am Permalink
Would you be jealous if I told you I wrote to Mr Pagani asking if I could drive the Huayra and he wrote back personally saying he would take me for a ride, as he did with the journalist above? I was honoured.