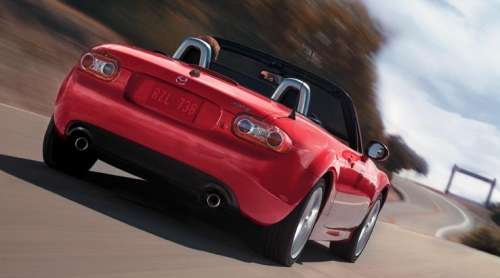 Inside Line has heard that Mazda engineers were tasked with dropping 720lbs from the current Miata. This is an astronomical number that is surely intended as an exercise to see the limits of what can be shed from the original car. This is excellent news since the Miata MX5 has grown larger and fatter as the years passed which is completely the opposite of what the true spirit of this car is.
Advertisement

The Miata is a bit of a joke in some circles. The car is so small, so nimble, and so dainty that one couldn't imagine any rough and ready men would drive it. You would be hard pressed to find any mountain man under the age of 30 that would drive one, let alone own one.

This year I turned 30 and much to the dismay of all my friends and my girlfriend, I declared that I would purchase a Miata. At the age of 30, you no longer care about what you wear or what people would think about you. You no longer have to match your clothes, you can wear colorful shirts, with short-shorts and bare feet all day long and nobody can say a thing. In contrast, if I had a Miata in high school, I would park six blocks away, drive with the top up, the visors down and the windows tinted black, or painted black, whichever was faster. This year, on my birthday, that all changed.

You see, the Miata is affordable by just about anyone. Fresh off the showroom floor the car handles astonishingly well. With a few suspension modifications it will seriously out-handle and out-dance any Ferrari currently sold. It surely doesn't have the power of a super car, but on the road, among the other cars, it literally makes you feel like a fly darting in and out of the legs of elephants.

I love the Miata. I don't care what anyone says about it, or would say about me driving one, I'm totally, emphatically and utterly in love with the MX5 for what it is, the purity of driving. It is such a light, simple and beautifully made car with the classic front engine, rear wheel drive layout. It is wonderfully made and slaps even the Egyptian Pyramids in the face with the mighty glove of reliability.

Once the Mazda engineers figure out how to lose 720lbs, they can see what sacrifices need to be made, and analyze whether or not they are even sacrifices. If needed, they can revert a few cuts, but they have set such a huge weight loss, that adding a bit here and there would still make it the lightest Miata ever. Surely a smaller, lighter engine would be part of the package since a lighter car only needs smaller (more fuel efficient too!) engine. Rumors exist of the new Miata getting an efficient 1.4 liter turbocharged and direct injected four cylinder engine.

The fact that Mazda has decided to bring the Miata back to even simpler and more pure roots of low weight, better handling is music to my ears. For once a car is becoming smaller and lighter rather than bigger and fatter. Thank you Mazda.

ricky wrote on January 25, 2012 - 10:03pm Permalink
When this car came out I was in high-school, it was considered COOL - VERY COOL back then. Then as years went by certain segments of society - mainly while-males became VERY INSECURE with themselves in public and found it necessary to hide behind large vehicles to fullfill their need to feel LIKE men. REAL MEN drive tiny sports cars like the miata -- today everything is backwards -- in 1989 the person in the SUV (minivan) was an embarassment -- and they person in the little red convertible was the 'man' -- today its all backwards -- WHITE MALE INSECURITY repeat it 10 times
Anonymous wrote on August 6, 2012 - 12:10pm Permalink
Men who have a "need" to drive large SUVs or pickups, are either compensating for something or are insecure in their manhood. Such men drive such vehicles based on a desire to portray a "manly" image to society because they are unhappy with something else in their lives. It's basic psychology, and I think I'm safe in making this generalization.