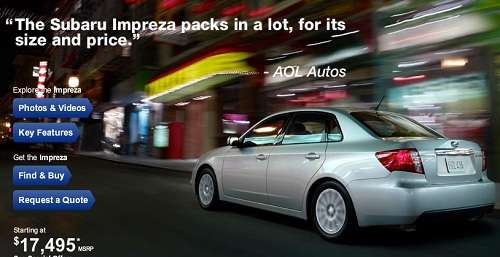 Subaru to make a change in the Impreza line up

For almost two decades Subaru has used the Impreza as a WRC championship winning caliber rally car, an award winning commuter car, and started a following of enthusiast like the world has seldom seen. Subaru first introduced the Impreza in 1993.
Advertisement

Subaru Impreza came in many different options, even a FWD version but that was soon axed from the line up. Body styles were a coupe,sedan, or a 4 door wagon. Engine choices were varied as well. You could at one time get a 1.8L,a 2.2L, or a 2.5L. The 2.2L and 2.5L were AWD standard.

The WRX/STi variants weren’t introduced till later in 1994.The first WRX was released in Japan. The WRX/STi veriants were 4 door base Imprezas with high performance upgrades in the areas of power and handling. The WRX/STi came with the popular turbocharged EJ20/EJ25 engines that put out anywhere between 240-300 hp. The power was then tranfered to the ground via a five or a six speed manual. The WRX did come with an automatic, that actually responds pretty well, but not the option anyone really wants in a sports car.

Suspension upgrades of Subaru Impreza included stiffer spring and beefier roll bars. No FWD WRX/STI were ever made. Brake and tire upgrades were made ad well, with WRX getting 4pot barkes up front and 2 pots in the rear. Hiding behind small 16 inch Alloys. The STi got nicely styled Brembo brakes and BBS 17in. wheels to hide the Brembos. Many of us here in the United States did not even hear of the WRX until it was released in 2002. And an STi... forget about it. Subaru waited almost 11 years before bring the STi to American shores in 2004.

Although there have been many changes and facelifts of the Impreza, they have never strayed to far from the original design. Small, efficient and fun to drive. Now however, Subaru has decided to take the Impreza and market it as a different animal as the WRX/STi. With the new 2012 Imprea getting another redesign after the 2011 WRX got a much needed redesign. The new Impreza is gonna be sporting a new Highly fuel efficient 4 cylinder boxer motor, the FB20.

Why separate them you maybe asking yourself? Well Subaru has reportedly no plans on turbocharging this new engine. Mr Akihide Takeuchi, Subarus Impreza Project General Manager, says that the number one goal for the new engine is its fuel efficiency, not its power. It was designed to be a naturally aspirated fuel sipper that delivers decent power. Not a 300 HP turbocharged beast like the top of the fleet STi. Subaru has plans for the WRX/STi but for now there going use the 2011 design for some time. Mr. Akihide Takeuchi did however, include that Subaru was working on a new turbocharged power plant for the up and coming WRX/STi. And no it wont be a redesigned EJ20. There may even be talk of a hybrid Impreza floating around the Subaru camp.