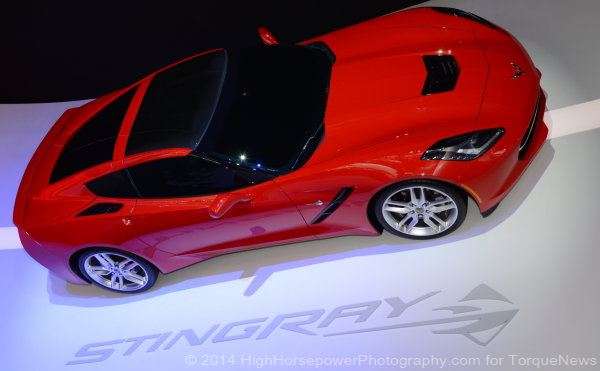 The 2014 Chevrolet Corvette was offered in four basic trimlines with three equipment groups for each and through the entire model year, the Z51 3LT coupe is the most popular configuration of the C7 Stingray – while Torch Red was the most commonly chosen color among the 37,288 2014 Corvettes sold.
Advertisement

Yesterday we looked at the successful year for the 2014 Chevrolet Corvette Stingray with 37,288 units built and sold making 2014 one of the most successful model years of the past few generations. Today, we take a look at the most popular trimlines, equipment packages, colors and standalone option items across the entire lineup.

Z51 3LT Coupe Leads the Way
The 2014 Chevrolet Corvette Stingray was offered in four trimlines – Coupe, Convertible, Z51 Coupe and Z51 Convertible. Each of those trimlines is then offered in three different forms – 1LT, 2LT and 3LT.

The most popular trimline for the 2014 Corvette Stingray was the Z51 Coupe, with 41% (15,431 units) of all Corvettes sold sporting this highest performance form. Among those Z51 Stingray coupes, a whopping 61% were fitted with the top of the line 3LT equipment package while 29% picked 2LT and just 9% opted for the base model 1LT layout. This means that 9,412 2014 Corvettes had a starting price (before any standalone options) of right around $70,000.

The next most popular configuration for the 2014 Corvette was the “base model” Stingray coupe with 30% (11,134) of the total figure. Among those non-Z51 Stingray coupes, the most popular equipment group was 2LT with a 42% take rate, followed closely by the 3LT at 35% and the 1LT package was the lowest of the three with a rate of just 23%. With 23% of the non-Z51 Corvette coupes being fitted with the 1LT features, just 2,560 2014 Corvettes were sold in their absolute base form.

Torch Red, Painted Top are Most Popular Exterior Colors
While the most popular color across the majority of the C6 Corvette model years was black, Torch Red was the most commonly chosen exterior color for the 2014 Chevrolet Corvette Stingray with roughly 7,073 new Vettes painted bright red. I attribute that to the fact that the new Stingray was introduced to the world in bright Torch Red as once everyone saw how awesome the new Corvette lines looked in bright red – lots of people wanted one. Torch Red accounted for 19% but it was closely trailed by Arctic White at 17% and Black dropped to third with 16%. The least popular color was Lime Rock Green with just 4% (1,491 units) painted the deep metallic green…but considering that this color was part of a special edition package, it comes as no surprise that it had the lowest take rate.

The removable top of the 2014 Chevrolet Corvette Stingray coupe is available in a collection of looks including a painted top, a transparent top, a visible carbon fiber top, a body colored dual roof package and a carbon fiber dual roof party. The painted top was the most popular, with 52% going that direction. The take rate for the other options is listed below:
Painted Top – 52%
Transparent Top – 26%
Visible Carbon Fiber Top – 13%
Body-Color Dual Roof Package – 6%
Carbon Fiber Dual Roof Package – 4%

Performance Exhaust, Navigation, 6-Speed Automatic Transmission Lead the Options
In addition to the three different equipment packages, the 2014 Chevrolet Corvette Stingray comes with a collection of standalone options. The most popular option for the 2014 Corvette – with a stunning 84% take rate – is the Performance Exhaust System that adds some sound along with 5 horsepower and 5lb-ft of torque. The next most popular option is the Navigation package, with 82% of the new Chevy sports cars coming with the nav system. Finally, the 6-speed automatic transmission with standard paddle shifters was the third most commonly chosen option, with 65% of all 2014 Corvettes purchased coming with the self-shifting gearbox. That means that 24,237 new Corvettes out of 37,288 total had an automatic transmission and some 32,321 had the performance exhaust setup.