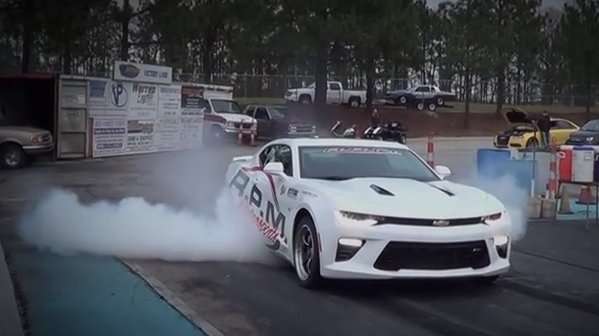 Earlier this year we featured the 2016 Chevrolet Camaro SS built by RPM Motorsports when they turned in a 10.00 quarter mile run and today, we have that same Camaro laying down the fastest track time we have seen for the 6th gen muscle car – running a 9.63 at 139 miles per hour and staking its claim as the quickest 2016 Camaro in the world.
Advertisement

When the 2016 Chevrolet Camaro began shipping late last year, we knew that it would only be a matter of time before we saw some record-setting quarter mile runs. Our article about the 1st 10-second video came on December 18th and on January 6th, we brought you a piece featuring the quickest 6th gen Camaro in the country – running a quarter mile time of 10.00 seconds at 137 miles per hour. At that point, we knew that it was only a matter of time before a new Camaro broke into the 9-second quarter mile range and, not surprisingly, the 1st 2016 Camaro in the 9s is the same that we featured earlier this month.

However, with a time of 9.63 seconds, this 2016 Camaro SS didn’t just sneak into the 9-second range – it went storming in with a flashy shop-themed livery that makes sure that everyone knows who built the world’s quickest 2016 Camaro.

RPM Camaro Goes 9.63
This 2016 Chevrolet Camaro SS is obviously powered by the LT1 V8, but the folks at RPM Motorsports in Garner, North Carolina have added gobs more power. Modifications include a ported cylinder head and camshaft package from Lingenfelter, Kooks headers and full 3 inch exhaust, a Nitrous Outlet 90mm plate kit, a Nitrous Outlet dedicated fuel system and an MSD intake. There is no mention of the jet size on this run, but on the 10.00 run earlier this year, they were running a 150hp jet – so figure that they are running jets at least that big on this run. Finally, this Camaro appears to have lightweight wheels with skinny tires up front and big fatties out back for optimum traction.

The result of these modifications is a 2016 Camaro SS that lays down enough power to run a 9.63 quarter mile with a trap speed of 139.75 miles per hour. This run makes this the quickest 2016 Camaro in the world while also being the first to run in the 9-second quarter mile range.

Of course, if anyone reading this knows of a video online proving that a different 2016 Camaro can run quicker quarter mile times, let us know about it in the comments below. Until then, I believe that this RPM Motorsports Camaro is the quickest 6th gen in the world.