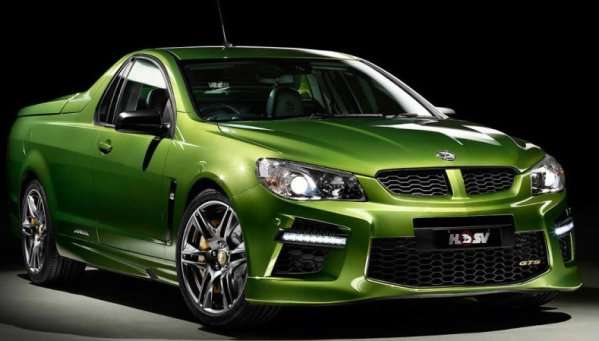 General Motors' Holden brand in Australia has just announced that their new GTS Maloo will be the fastest and most powerful "ute" in the world thanks to a power plant borrowed from the mighty Chevrolet Camaro ZL1.
Advertisement

While Americans might prefer the look of a coupe like the Chevrolet Camaro ZL1 when it comes to performance cars, the Australian performance car market is privy to a unique form of 2-door car known as a ute (short for utility vehicle). Americans might recognize the ute design from the likes of the old Chevy El Camino, but while that form of vehicle has faded away in the United States, it continues to thrive Down Under.

A ute by Australian means would be what some Americans may jokingly call a “pickup car”, with the front end of a car and the back end of a smaller truck.

General Motors’ Holden brand has just pulled back the sheets on their newest ute and they are promising that the HSV (Holden Special Vehicles) GTS Maloo will be the fastest and most powerful vehicle of its type in the world. Not surprisingly, the GTS Maloo will attempt to stake those lofty claims with the same supercharged V8 that powers the current Camaro ZL1 and the previous Cadillac CTS-V sedan.

The World’s Most Powerful Ute

While American’s might not appreciate the claim of the new Holden GTS Maloo being the most powerful ute in the world, it isn’t hard for anyone who loves big power to appreciate the output of the 2-door utility vehicle. Packed under the hood is the supercharged 6.2L LSA V8 from the Chevrolet Camaro ZL1 which, in this application, makes 577 horsepower and 546lb-ft of torque. That power is sent to the rear wheels via a 6-speed automatic or manual transmission and a limited slip differential with torque vectoring capabilities.

I haven’t been able to locate weight figures for the new HSV GTS Maloo, but I was able to find figures for the current Maloo R8 that is similar to the GTS, minus the supercharged V8. That less powerful model has a curb weight of 1721 kg – or 3,795 pounds. The supercharger setup likely adds some weight to the GTS model, so for the sake of discussion we will use 3,900lbs as the (conservatively) estimated weight of the 577hp Maloo.

For comparison, the Camaro ZL1 with the same drivetrain is among the quickest and fastest cars in America and it has a curb weight of 4,120 pounds so to get an idea of just how fast this new GTS Maloo will be – imagine a Camaro ZL1 that had around 200lbs stripped away.

SEE ALSO: How Does the 2015 Corvette Z06 Stack Up Against the Performance World?

More Than Just a Supercharged Engine.

The Holden Special Vehicle team wanted the new GTS Maloo to be an ultimate performance car, just like the high performance utes that came before it, so the engineers didn’t stop with just the big supercharged engine. First off, HSV fitted this Maloo with a new performance tuned suspension system and a monster braking package with 15.4 inch rotors up front and 14.6 inch rotors out back. This is a serious braking system that will likely allow it to make a run at the Nürburgring ute record as the fastest to lap the German course with a truck bed.

This record was set back in 2013 by a Holden VF SS Redline that “only” had 350 horsepower so suspension tweaks aside, the massive jump in power should help the new GTS Maloo cut at least a few seconds from the brand’s previous best of 8 minutes and 19 seconds.

So far, Holden hasn’t provided any real world numbers to back up the claim of the new GTS Maloo being the fastest ute in the world, but considering that this new model packs more power than anything in the class before it – that is likely a pretty safe claim. Best of all, since Holden set the record for the world’s fastest ute at the Nürburgring with their VF SS Redline, there seems to be a good chance that the GTS Maloo will eventually make it to the roads of German to take on the Green Hell.
Should the Camaro ZL1-powered Holden ute make a ‘Ring record run, you can be sure to find more on that here on TorqueNews.com. In the meantime, check out the introduction video for the new GTS Maloo below.