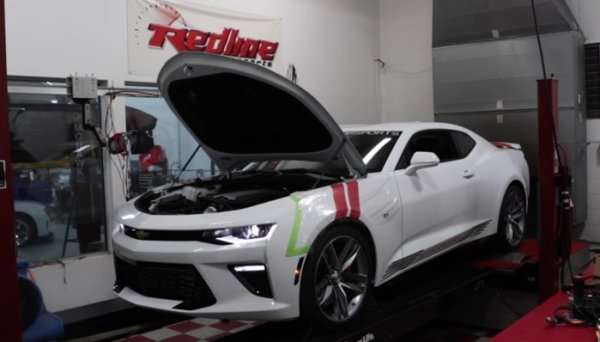 Since the 2016 Chevrolet Camaro officially hit dealerships late last year, shops around the country have been quick to show off their souped-up 6th gen Camaros, but SS coupe from Redline Motorsports is the first in the world to add a twin turbo setup to the next generation muscle car – with more than 650 rear wheel horsepower on an otherwise stock motor.
Advertisement

The 2016 Chevrolet Camaro SS is powered by the same 6.2L LT1 V8 as it offered in the C7 Corvette Stingray. With 455 horsepower and 455lb-ft of torque, this is the most powerful Camaro SS ever, but for muscle car owners, there is no such thing as enough power and in the case of this 6th gen Camaro, the owner wanted serious power.

That is where shops like Redline Motorsports come into play, transforming this Camaro into a twin turbo beast with more than 650 horsepower and 630lb-fr of torque at the rear wheels.

Redline Boosts the 2016 Camaro SS
The team at Redline took this 2016 Chevrolet Camaro SS with the 8-speed automatic transmission and built an intercooled turbo setup from scratch and the video below offers us a quick glimpse at the process. From all of the tubing needed to send the compressed air through the massive custom front mount intercooler to the placement of the turbochargers themselves, Redline built this twin turbo setup around the fully stock LT1 engine and when finished, they strapped this 2016 Camaro SS to the dyno.

Based on the information provided, this power was made without any other modifications, including a factory stock fuel system which proved to be the limiting factor in making more power. These power numbers were reached with 9 pounds of boost pressure and the team stopped there due to the fuel system’s inability to provide enough fuel for more air. In other words, if the fuel system could feed in more gasoline – this twin turbo system would produce more than “just” 650 rear wheel horsepower.

Now that Redline Motorsports has staked their claim as being the first to build a twin turbo kit for the 2016 Chevrolet Camaro SS, we are sure to see more kits with even greater power levels hitting the internet over the course of the next few months…if it takes that long.

In the meantime, crank up your speakers and fall in love with the first twin turbo 2016 Camaro SS.