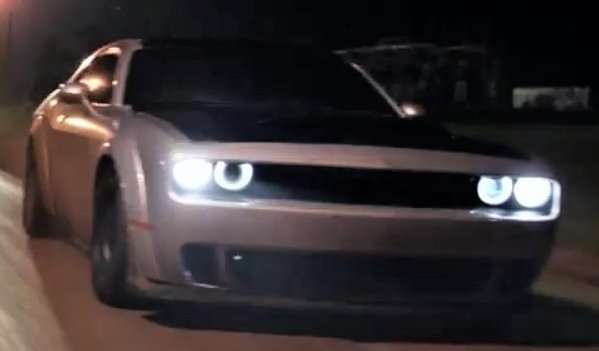 The first trailer for the upcoming 8th installation of the famed “Fast and the Furious” movie series dropped this weekend and included in this 3-minute clip is a good look at a Dodge Challenger SRT Hellcat with a widebody kit – which has in turn stoked up the rumors of a widebody Challenger coming from Dodge.
Advertisement

There is no automotive movie series that has lasted as long or drawn as much attention as the Fast and the Furious franchise, and with the debut of the trailer for “Fate of the Furious”, it looks as though the Dodge Challenger SRT Hellcat will play a major role in the 8th chapter of the well-known automotive saga. However, the Hellcat Challengers shown in the trailer below aren’t your run of the mill Dodge coupes, as it appears that these Mopar muscle cars are fitted with a widebody kit.

Keep in mind that after the Mopar team debuted the Challenger GT AWD Concept at the 2015 SEMA Show with a widebody package, there has been massive speculation that FCA would eventually offer these flared fenders as part of a factory package. There have been plenty of rumors insisting that the company was building a widebody Challenger and there have even been some spy shots capturing Challenger test cars with flared fenders, but the footage from Fate of the Furious is the best look we have gotten thus far at what could be the future widebody Hellcat Challenger.

Fate of the Furious Hellcat Challengers
Now, before going any further, we should talk for a second about the Fast and the Furious (FATF) movie series and the vehicles featured in the past 7 films. In every case, the cars, trucks and SUVs showcased in all of the FATF movies are heavily modified in every imaginable way. We have seen a classic Dodge Challenger with an ejection seat. We have seen a modern Dodge Challenger Scat Pack lifted, fitted with a parachute and dropped from a plane. We have seen countless cars armored and prepared for on-road battle.

In short, just because a car appears a certain way in a FATF movie certainly doesn’t mean that it will become a production reality. It could certainly be written into Fate of the Furious that Dom and his team modified these Hellcat Challengers with a widebody kit package just like they would modify any other vehicle in the series, but with so many rumors about a factory widebody package- the appearance of these widened Mopar muscle cars is noteworthy.

Also, in fine FATF fashion, the camera angles in the first trailer for Fate of the Furious are always changing, so it is tough to tell if all of the Dodge Challenger SRT Hellcats are fitted with this widebody package, or if it is just certain cars in this particular chase scene. The still above shows the widebody Hellcat driven by Dominic Toretto (Vin Diesel) and it looks as though some other cars in the scene have a similar design – but the portion of the clip in the screen shot above offers the best look at this Dodge muscle car.

A Closer Look at this Widebody Hellcat Challenger
While we only get to see the Dodge Challenger SRT Hellcat with the widebody package for a total of a few seconds during the course of this 3-minute trailer, we get a good look at the car from a few different angles. In every angle, we can see a widebody package that looks very similar to the design featured on the 2015 SEMA Show Challenger GT AWD Concept, with front and rear wheel flares that are clearly separate units from the fenders and quarter panels, but they have a cleaner attachment than the aftermarket widebody flare kits for the new Challenger. More importantly, it looks as though the front chin spoiler extends up around the outside of the front flares, similar to the SEMA concept car and very unlikely the Liberty Walk widebody kit, which has the flares covering the outer edges of the splitter.

The area where the front flares meet the chin spoiler on this Hellcat Challenger is unique from most of the privately owned cars with an aftermarket package, so if nothing else, these cars appear to have a front end that is very similar to the look designed by the Mopar team for SEMA last year as opposed to your basic aftermarket/body shop job.

Now, I should close by pointing out that FCA has been involved with the FATF series for a while now and based on the Dodge-heavy cast of vehicles in the trailer for Fate of the Furious – I would guess that FCA is still closely involved with the making of this movie. Considering that involvement, Dodge could have certainly offered up the widebody design of the Challenger GT AWD Concept for the sake of the movie…or this could be our first look at the long-rumored widebody Hellcat Challenger.

In any case, I think that the movie looks great and I can’t wait to see Dom and his crew tearing up the streets in their Hellcat Challengers. In the meantime, check out the new trailer below!