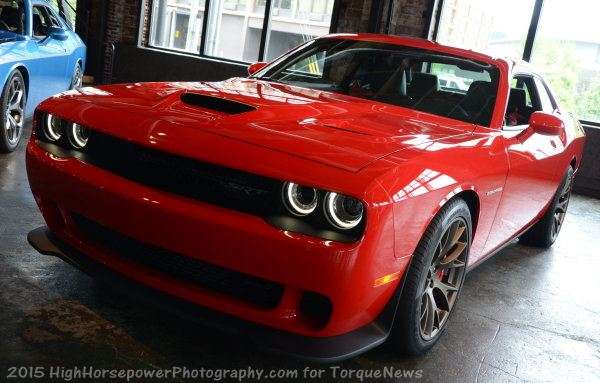 Why You Shouldn't Expect Changes for the 2016 Dodge Challenger Hellcat

There have been a few rumors floating around about changes coming for the 2016 Dodge Challenger SRT Hellcat so I wanted to address these rumors while offering an explanation as to why we shouldn’t expect any real changes for the 2016 model year.
Advertisement

When the Chrysler Group introduced the 2015 Dodge Challenger SRT Hellcat with 707 horsepower and a price that technically starts under $60,000, they had a pretty good idea that it would succeed in the power-loving market. However, with no car like the Hellcat Challenger in the past combining performance and price, the company really didn’t have an idea as to how well it would sell.

Well, it turns out that offering a muscle car with 707hp and a price starting under $60k alongside a super sedan with the same output and a price starting just higher than the 2-door version leads to a massive sales rush, as the 2015 Hellcat Challenger and Charger were selling so well that the company had to stop taking orders. Word on the street suggests that over 9,000 examples of the Hellcat Challenger and Hellcat Charger, which is a far higher number than the company had ever expected.

This huge demand for the Hellcat Dodge cars has led to a major shortage of engines, which has slowed production and delivery of the 707hp Challenger and Charger. With Chrysler working so hard to fill all of the orders for the 2015 model year Hellcat cars, Chrysler hasn’t had a single word to say about the 2016 model year versions of the high performance Challenger and Charger, so anything that you read on the internet right now is purely rumor – but with the 2015 models being such a hit, I wouldn’t expect any changes for the 2016 model year.

Below, I take a look at the rumors floating around the internet and explain why they aren’t true, along with offering up what I expect to see different for 2016.

More Hellcat Power
There has been a rumor floating around the internet that the 2016 Dodge Challenger SRT Hellcat will have 721 horsepower rather than 707. The Hellcat cars are selling so well and they have so little real competition in key markets that there is simply no reason to increase the power ratings. It isn’t like adding 14 more horsepower will be the deciding factor for a prospective buyer who is on the fence.

However, it has become all but official information that the supercharged 6.2L Hellcat Hemi makes more than 707 horsepower and that number was just picked because it looked good on marketing material. If the need arises, Chrysler could “recertify” the power levels of the Hellcat Hemi without really changing anything, but there is really no reason for the company to do it for 2016 – especially with the demand so high already.

No 2016 Model Year Hellcat
This rumor is a tricky one, as on one hand, I cannot imagine the incredible Hellcat Challenger and Charger skipping a model year, but with the company seeming to be a very long way from filling all of the orders for the 2015 model year Hellcat cars, you have to wonder what they are going to do for 2016.

Typically, we are getting close to the time of year where production of the model year which corresponds to the calendar year comes to an end, as the factories begin retooling for the new model year. However, with the 2015 Challenger Hellcat being so heavily backordered, the company will likely need to extend 2015 production to meet the demand. If there are no changes at all for the 2016 Hellcat Challenger, the company could conceivably continue building the 2015 model year right up to the end of the calendar year, but that would surely cause problems for the launch of the 2016 model year Challengers.

While I honestly don’t know how Chrysler will fill all of the orders for the 2015 Hellcat Challenger and Charger, I believe that we will see a 2016 model year version of both and they will be very similar to the 2015 models – if they change at all.

Changes to Expect
The one area where I believe that we will definitely see some changes for the 2016 Dodge Challenger SRT Hellcat and 2016 Dodge Charger SRT Hellcat is in the color palate. The 2015 Challenger is offered in a unique and very popular bright green named Sublime, and I have been told by a Chrysler rep that it will not be offered in the 2016 model year. I received that information late last year and with the insane popularity of the color, perhaps the company will opt to bring it back for 2016, but I do expect to see some color changes for 2016.

The 2015 Hellcat Challenger is really only available in three bright, bold colors – Sublime, B5 Blue and TorRed. After that, buyers can pick from two different blacks, two different whites, two different greys and dark red. This color palate is fine, but many enthusiasts were disappointed to see a lack of a proper Hemi Orange on a car with the most powerful Hemi ever. They were also disappointed to see a lack of Plum Crazy purple or bright yellow, so for the 2016 model year, I fully expect to see at least one new, bright color.

The 2015 Charger Hellcat is offered in even fewer high impact colors, which is odd considering how popular the past Charger models with bright paint colors (Sublime, metallic orange, bright yellow, Plum Crazy) have been in the past. While I don’t expect to see Sublime in the 2016 Charger Hellcat option list, I do expect to see at least one bold, bright color for the new model year.

Jonathan wrote on August 5, 2015 - 5:00pm Permalink
The Hellcats right now are the best muscle cars on the market. I hope when the 2016 charger and challenger Srts come out they raise the hp from 485 to 580 hp or better. Im very happy to see Dodge on top I hope they stay there; I hope the Viper gets 800 plus hp as well.
Tony Winans wrote on August 10, 2015 - 10:23pm Permalink
The Challenger R/T Shaker for 2015 with 6 speed manual trans, Seems to e hard to get any idea of production numbers.
Thomas wrote on September 28, 2015 - 3:08pm Permalink
As a retirement gift to myself ... I will be looking for a Hemi-Orange, manual transmission, Hellcat!!! I just hope Dodge will make it an option within the next couple of years!